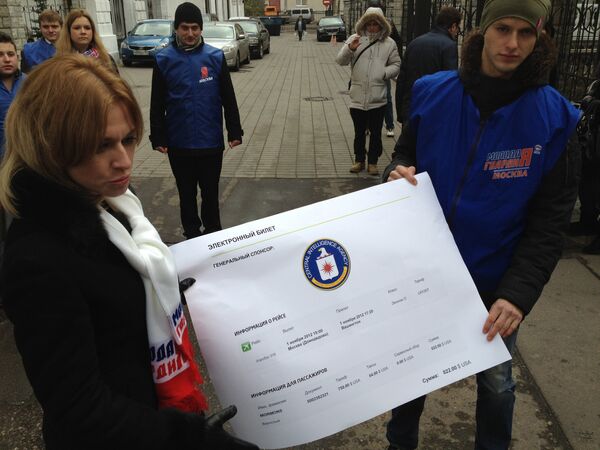 © RIA Novosti . Dan Peleschuk
Subscribe
International
India
Africa
The ruling United Russia party’s youth wing staged a protest on Thursday against Mormon missionaries, accusing them of being American spies and calling for them to leave Russia.

The ruling United Russia party’s youth wing staged a protest on Thursday against Mormon missionaries, accusing them of being American spies and calling for them to leave Russia.

Activists from Young Guard gathered outside the Church of Jesus Christ of Latter-day Saints’ Russian headquarters in Moscow, chanting slogans such as “No to foreign agents!” and hoisting placards reading “Foo, CIA!”

They also left a symbolic plane ticket, emblazoned with the CIA logo, for a one-way flight from Moscow to Washington outside the headquarters.

“This is an American sect,” said Ekaterina Stenyakina, co-chair of Young Guard’s coordinating committee. “They are funded by the United States of America, and it’s been proven that many young Mormons return to the US to work for the CIA and FBI.”

The move is the latest in a series of Kremlin-driven offensives in recent months directed against alleged foreign influence in domestic affairs.

Since President Vladimir Putin’s re-election to the presidency last March, the Russian parliament has passed a variety of laws restricting foreign and Russian pro-democracy and human rights organizations.

Just yesterday, the Federation Council, Russia’s upper house, approved a bill that broadens the definition of treason to potentially include NGOs that provide consulting services for foreign governments or organizations.

Last month, the Kremlin ordered the United States Agency for International Development to cease all operations in the country. The organization had funded many Russian civil society organizations for about 20 years.

Stenyakina issued a stern warning to Russia’s youth, who she claims are easily wooed by the free English lessons and community service provided by Mormon missionaries.

“It starts with free English lessons and then leads to becoming a missionary oneself,” she said, adding that the alleged $14 billion in humanitarian assistance in Russia provided by the church has gone “unnoticed.”

Experts said the Russian authorities have long worried about the LDS Church’s influence in Russia.

In 2008, the church was forced to re-route its Russia-bound missionaries after the Kremlin introduced new visa restrictions for humanitarian workers.

“Because [Mormons] are involved in humanitarian activity, such as feeding the homeless or handing out literature, this is perceived as some form of bribery,” religious expert Ivar Maksutov, a researcher at the Russian State University for the Humanities, told RIA Novosti recently.

“It is somebody’s opinion without any facts, without any legal investigation, without court decisions,” she said, adding that “preaching the gospel is our main goal.”

She also refuted Young Guard’s claim of the LDS Church’s alleged $14 billion assistance package in Russia, saying that the church has spent only about $5 million in humanitarian assistance in the country.