Russian Bikerettes Do Not Care About Feminism 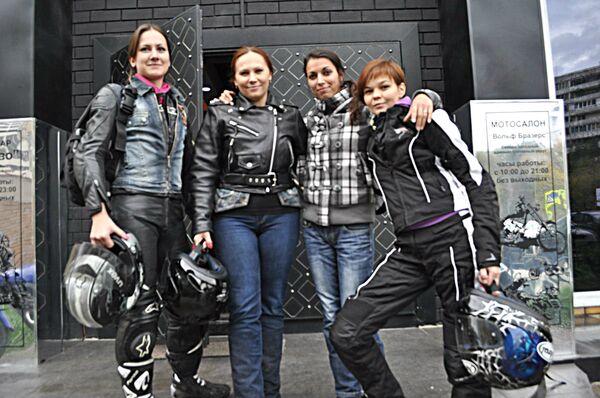 © Wings FMCC
Subscribe
The president of Russia’s first female motorcycle club works in the Harley Davidson workshop and rides a Fat Boy – the same bike that Arnold Schwarzenegger had in the Terminator.

The president of Russia’s first female motorcycle club works in the Harley Davidson workshop and rides a Fat Boy – the same bike that Arnold Schwarzenegger had in the Terminator.

But Maria Mukhina does not look like either an outlaw biker or a hardcore feminist, and certainly does not consider her lifestyle choice a crusade against the patriarchy.

“I guess we’re on the front line of feminism, but we’ve never noticed it,” Mukhina, a smiley woman in her 30s, laughed, during the interview at a Moscow café, for which she traded her club vest for a purple sweater.

There are almost 350 biker associations across Russia, and the number keeps on climbing, according to community website Moto.ru – but most are men-only associations.

However, for over a decade, Wings FMCC (Female MotorCycle Club) has accepted female Muscovites who enjoy a motorcycle ride enough to seek soulmates for this particular occupation.

The Wings do not see themselves as champions of their gender, but their peaceful insistence on doing something that most of the country considers a male preserve goes some way toward advancing gender equality in a country that has traditionally had problems in this area.
“We’re like other girls, we cook, clean and do laundry,” said club member Yelena “Maggis” Cherkashina. “It’s just that I…come here instead of sewing club in my spare time.”

Cherkashina was elected “Queen of the Bike Season” twice in a row in the last two years. She rides a sports bike and even teaches club prospects motocross, including in winter, when most Russian bikers – whatever their gender – leave their motorcycles parked in garages, avoiding the cold, the sleet and the deadly ice-clad roads.

Back in 1999, when Wings formed, barely any other motorcycle clubs existed in Russia, male or female, Mukhina said.

Then the scene was dominated by the Night Wolves, a mega-club with Kremlin ties, established in 1989 that today boasts 5,000 members across Russia and Eastern Europe.

But in those days the Night Wolves and other motorcycle clubs did not accept female members. They were working from an American template dating back to the 60s, when, as urban legend has it, most clubs barred entry to “blacks and women,” although in reality this was only right on the latter count.
“There are an awful lot of opportunities now, but back then, a girl had no choice,” recalled Mukhina, who has been riding for the last 17 years.

“So we decided, instead of feeling down about it, we’d just create our own club,” she said. And so it came to pass.

Wings is a regular motorcycle club by all counts, they pay visits to other clubs, and are visited in return. Typically for most Russian MCs, they stage events, ride across Moscow in the occasional cavalcade, and do charity work with children, including at Ice Cream fests, and also take part in trips to orphanages and searches for missing people.

They list a mere 11 members as of 2012, and four more official prospects, or hopefuls without the right to vote at club meetings. In age they range from their 20s to 40s, and work in areas including (but not limited to) teaching, IT, engineering and interior decoration.

They face no problems with bikers or motorists on the road, other than the sporadic flirtation, Mukhina said.

However, one club prospect admitted that her relatives fussed over “how can a woman ride a bike,” though they left the final say to her husband – who happened to be a motorcycle enthusiast himself.

Mukhina conceded that she knew of no other female motorcycle clubs outside Moscow and St. Petersburg, two cities with Russia’s highest concentration of the emancipated middle class.

The club receives the occasional application from women in the regions, she said. Her own seven-year-old daughter already rides a quad bike and has been in the seat of a Harley Davidson, in an indication that interesting times lie ahead for the biker movement.

(Not So) Perfect Gentlemen

Russia ranked 59th out of 135 countries and economies in the World Economic Forum’s 2012 Global Gender Gap Report, slipping 16 slots from the previous study.

Russian women – who comprise almost 54 percent of the population, according to the 2010 census – are insufficiently involved in economic activity and get little representation in politics, experts said.

The average salary in Russia stood at 30,000 rubles ($950) for men and 19,200 rubles ($600) for women in 2011, according to the State Statistics Service. Only two out of the 29 members of the current Russian cabinet are female, and the lower chamber of the federal parliament, the State Duma, lists 61 women among its 447 deputies – including, admittedly, one Playboy model.

But no discrimination was visible at Wings’s end-of-season party in late October, held in the clubhouse of the all-male Wolf Brothers MC.

Go-go dancers of both sexes performed in separate rooms at the event – and the show for the ladies, judging by the squeals emanating from, and images seen beyond, a tinted glass door, elicited much more excitement than that for the guys, many of whom, middle-class men in their 40s, were perfect wallflowers.

There was the occasional exception. “We’ve got a girl member now, but are about to kick her out,” confessed one male guest from a provincial motorcycle club, speaking on condition of anonymity.

“See, we’re all bros there, and it’s wrong when someone’s screwing your bro,” he said over a pint.

But the Wings claimed the male bikers were perfect gentlemen.

“When men team up for a brotherhood, they get this chivalrous spirit that keeps them very civilized,” said prospective member Natalia, who works with an engineering firm.

“I just want this freedom,” Natalia, who has an 18-year-old son, said of her own involvement with the motorcycle group.

“Half my life, my youth, was given over to my home and family. But I want my road to go on and not end here,” she said, before downing her drink and joining the other Wings members in the room with the male go-go dancers.