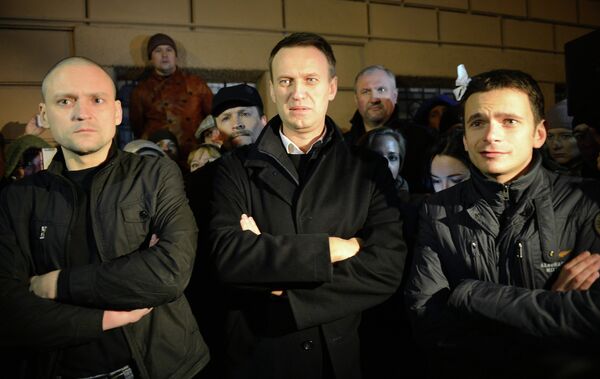 © RIA Novosti . Maxim Blinov
/
Go to the mediabank
Subscribe
International
India
Africa
Russian protest leaders Alexei Navalny and Sergei Udaltsov were detained on Saturday at a central Moscow demonstration against the alleged torture of a political activist by security forces.

Russian protest leaders Alexei Navalny and Sergei Udaltsov were detained on Saturday at a central Moscow demonstration against the alleged torture of a political activist by security forces.

“I was walking along the sidewalk when I was detained. No explanation was given,” Udaltsov tweeted after being seized by police officers near the HQ of the Federal Security Services (FSB).

Around 200 people took part in Saturday’s event, which saw protesters with placards line the streets from the FSB HQ to the capital’s Lefortovo prison. Activists stood alone along the route to avoid falling foul of a law which forbids unsanctioned demonstrations, but allows people to protest individually.

Russia’s newly-formed opposition council had held its first meeting earlier in the afternoon. The Coordinating Council, of which Navalny, Udaltsov and Yashin are all members, was formed last week after an online vote in which 81,000 people voted.

There was a heavy security presence at Saturday’s protest, which at one point saw dozens of demonstrators surround a black government car they said had strayed into the oncoming lane. Protesters refuse to disperse until police had ticketed the driver. “One law for all!” protesters chanted, applauding when officers escorted the driver to a police vehicle. The government vehicle had tinted windows and it was not clear who the back-seat passenger was.

The protest came after Left Front activist Leonid Razvozzhayev told rights workers last week he had been abducted in Kiev while seeking refugee status from UN officials. He said masked men had then held him for two days without food and water and threatened to kill him and his children if he did not confess to planning mass disorder with the aim of overthrowing President Vladimir Putin.

Investigators said Razvozzhayev, who retracted his confession on Thursday, had handed himself in and was in his “right mind” when he signed the ten-page confession in Moscow. A spokesman for the Investigation Committee, an FBI-type organization that answers to the president, said investigators were probing the torture reports.

“I am here because they came for Razvozzhayev, and I am afraid they could come for any of us next,” said Marina Kormukhina, a middle-aged academic, as she held a placard reading “I am against torture and repression.”

“I do not want to see Russia return to 1937,” she added, a reference to the peak of Soviet dictator Stalin’s purges.

The charges of plotting mass disorder stem from grainy footage aired by the pro-Kremlin NTV channel earlier this month. NTV said the clip showed Udaltsov, Razvozzhayev and fellow Left Front members Konstantin Lebedev meeting Georgian politician Givi Targamadze to discuss plans to seize power in cities across Russia. The documentary also alleged Udaltsov had considered bringing in Chechen fighters to assist with the plot. Udaltsov says the footage is fake and that the documentary is part of a wave of oppression against protest leaders.

Udaltsov, who has helped organize mass street protests against Putin’s rule, was charged with planning mass disorder on Friday but released on a pledge not to leave Moscow. Both Razvozzhayev and Lebedev are in custody awaiting trial.

Russia’s newly-formed opposition council, of which the detained leaders are all members, has called for a mass protest on Tuesday against what it says is a concerted crackdown against dissent by the authorities.

Navalny faces ten years behind bars after he was charged this summer was large-scale embezzlement over a 2009 case. He has called the allegations “strange and absurd” because the case had already been probed twice without charges being brought.

A number of other opposition figures have also faced legal problems since Putin’s return to the Kremlin amid violent protests in May.

Putin denied earlier this year that he was clamping down on the leaders of the unprecedented protests against his almost 13-year rule, saying everyone must “comply” with Russian laws.

Putin’s spokesman declined to comment on the torture allegations on Wednesday.