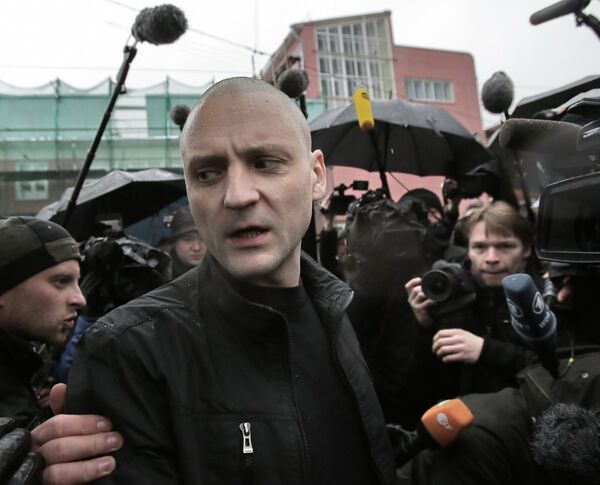 Russian protest leader Sergei Udaltsov was charged with plotting mass disorder on Friday and could face up to 10 years behind bars if found guilty.

Russian protest leader Sergei Udaltsov was charged with plotting mass disorder on Friday and could face up to 10 years behind bars if found guilty.

“If anyone expected me to flee abroad, they were mistaken,” Left Front leader Udaltsov, 35, said as he reported to investigators for questioning. “The Putin regime will be on trial,” he wrote later on Twitter.

Udaltsov, a fiery, shaven-headed leftist who has helped organize mass protests against President Vladimir Putin’s rule, was released on a pledge not to leave Moscow. His lawyer, Violetta Volkova, had said she expected her client to be taken into custody.

“The investigators are playing some kind of game,” Udaltsov tweeted on Friday.

Media reports had speculated that Udaltsov, who had not been seen in public all week, could try to leave Russia before Friday’s summons.

“Udaltsov was under close observation, but at one point the people trailing him vanished,” Left Front activist Alexei Sakhnin told journalists outside the HQ of the Investigation Committee. “We were given a clear signal. They expected him to flee to some civilized country and for us quit the political arena.”

The charges against Udaltsov stem from grainy footage aired by the pro-Kremlin NTV channel earlier this month. NTV said the clip showed Udaltsov and fellow Left Front members Leonid Razvozzhayev and Konstantin Lebedev meeting Georgian politician Givi Targamadze to discuss how to overthrow Putin. The documentary also alleged Udaltsov had considered bringing in Chechen fighters to assist with the plot.

Udaltsov says the footage is fake and that the documentary is part of a wave of oppression against protest leaders.

Both Lebedev and Razvozzhayev are in custody awaiting trial.

Razvozzhayev told human rights workers who visited him at a pre-trial detention facility in Moscow on Tuesday that he had confessed to the alleged plot and incriminated leading members of the anti-Putin protest movement after masked men seized him in the Ukrainian capital of Kiev.

Razvozzhayev said the men had snatched him on the street after he had stepped out of the local office of the United Nations High Commissioner for Refugees. He said they had threatened to kill him, and his children, if he did not sign a ten-page confession. His lawyer, who was allowed to visit him for the first time on Thursday, said he had now retracted his confession and would press charges.

“If Razvozzhayev or his supporters believe his repudiation of his testimony is a key issue in this criminal case, then I will have to disappoint them, we have plenty of other evidence,” Investigation Committee spokesman Vladimir Markin said on Friday.

US State Department spokeswoman Victoria Nuland told journalists on Thursday that the United States was “concerned about allegations that he [Razvozzhayev] was forced to confess, that he may have been subjected to torture.”

Russia hit out furiously at what it said was the “unfounded” and “hypocritical” US concern over the Razvozzhayev case.

“The United States has yet to fulfill the promises of the Obama administration,” Russia’s Foreign Ministry said in a statement on Thursday. “Not a single American soldier or member of the special forces guilty of the systematic torture of American citizens or foreign citizens in Iraq, Afghanistan, special CIA prisons or Guantanamo Bay has been punished.”

Putin’s spokesman declined to comment on the case on Wednesday.

“This is hardly the kind of thing the Kremlin can and should comment on,” spokesman Dmitry Peskov said. “This is a matter for investigation agencies, prosecutors, lawyers and human rights workers.”

A spokesperson for Ukraine’s Interior Ministry admitted that “foreign special services,” most likely Russian, had snatched Razvozzhayev. Ukraine's security services said on Friday it would look into the case.

“This is a serious test for society,” Russian human rights worker Lev Ponomaryov told RIA Novosti. “But today we have the internet and some kind of civil society, so I hope we will be able to resist and avoid a return to a totalitarian system.”

Russia’s newly-formed opposition council has pledged to take to the streets on Saturday and next week to protest what it called “the widespread persecution of dissidents.”

Some two dozen protesters gathered outside the headquarters of Russia’s Federal Security Service (FSB) on Thursday for a third straight day. There were no arrests, although police detained three protesters on Tuesday evening.

“It is impossible to stay silent in a country where they openly abduct and torture people,” said writer Viktor Shenderovich outside FSB HQ. “But, unfortunately, Russian society has degraded in recent years and we have no tradition of protest.”

The Kremlin’s Human Rights Council said this week it would comment on the case when its representatives were allowed to visit Razvozzhayev.