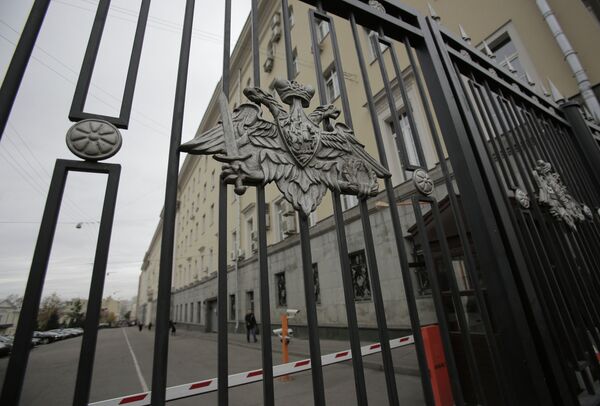 Officers of the Russian Investigative Committee’s Main Military Investigation Directorate have seized documents in the Defense Ministry’s property department and questioned its officials, the directorate said on Thursday.

Officers of the Russian Investigative Committee’s Main Military Investigation Directorate have seized documents in the Defense Ministry’s property department and questioned its officials, the directorate said on Thursday.

The seizure was part of an ongoing probe into an alleged large-scale embezzlement in the ministry's structures. Investigative Committee spokesman Vladimir Markin said earlier on Thursday that managers in a ministry property management company are under investigation for alleged embezzlement of over 3 billion rubles ($96 million), by selling off properties at below market value.

Managers in the ministry’s property services holding company Oboronservis also allegedly used ministry funds to renovate some of the most lucrative properties, and then illegally sold them or rented them out for commercial purposes. Some of the properties were in Moscow, which has some of Europe’s most expensive real estate.

"The famous Soyuz Hotel and an adjacent land plot in the capital were sold for just 600 million rubles (about $19 million), or thirty percent below market value," he added.

The investigation has also uncovered instances of real estate and plots of land in Russia's Krasnodar Territory being confiscated from state use, rented out, developed and sold for alleged personal gain, the spokesman said.

Five criminal cases have been opened in connection with the affair. Searches were held on Thursday at Oboronservis offices and at the homes of its employees, investigators said.

Oboronservis was set up in 2008 and carries out repair and services for Defense Ministry properties as well as repair and maintenance of military equipment and provision of services to military garrison towns.

A law enforcement source told RIA Novosti that no detentions are planned in the near future as part of the ongoing investigation.

Defense Minister Anatoly Serdyukov was informed of the investigation and arrived at one of the locations being searched, law enforcement sources said on Thursday morning.

Presidential administration head Sergei Ivanov said it will be up to the court ot rule who is guilty.

“Only the court may determine whether a person is guilty or not. All the rest is vibrating air and propaganda,” Ivanov told journalists.