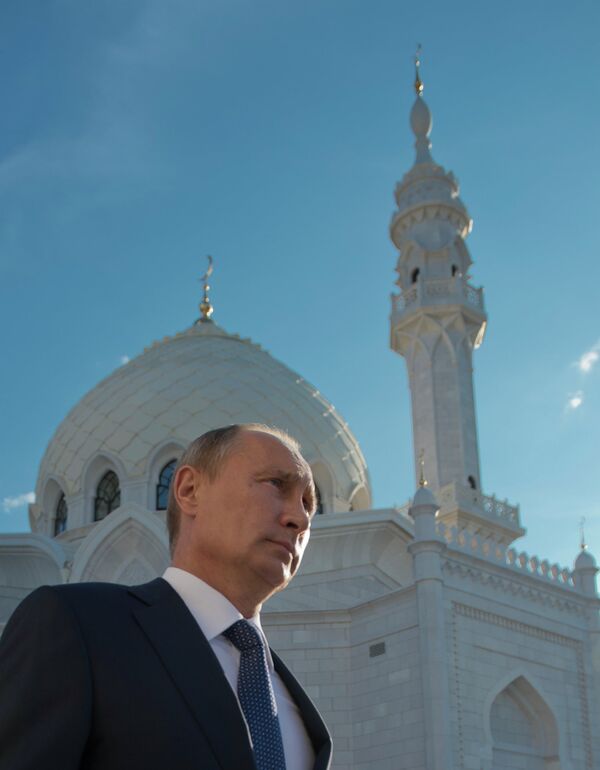 Russian President Vladimir Putin sent his greetings to Muslims on the Eid al-Adha holiday, which begins on Thursday and continues through the weekend, the Kremlin said.

Russian President Vladimir Putin sent his greetings to Muslims on the Eid al-Adha holiday, which begins on Thursday and continues through the weekend, the Kremlin said.

“Over the centuries this holiday is filled with the brightest and most gracious feelings. It brings people closer, affirms the ideals of kindness, compassion and respect, and reveals the depth of the timeless spiritual values of Islam,” Putin's statement read.

Russian Foreign Minister Sergei Lavrov offered the more specific wish for a ceasefire in Syria throughout the holiday period.

“I very much expect that the attempts to organize a truce that are currently underway will succeed,” Lavrov said after meeting with his Swiss counterpart, Didier Burkhalter.

The UN and Arab League special envoy to Syria, Lakhdar Brahimi, has called for Syrian government forces and rebels to agree a truce throughout Eid al-Adha. The Syrian government said on Wednesday it agreed the proposal and some members of the armed opposition also responded positively.

Speaking about his talks with Burkhalter, Lavrov said: “We are convinced that there can only be a political solution to the [Syrian] crisis and that the sooner the violence ends and a dialogue without preconditions begins, the more hope all of us will have for exiting the crisis with the least harm done.”

Eid al-Adha, the Festival of Sacrifice, comes the day after pilgrims making the Hajj to Mecca in Saudi Arabia descend from Mount Arafat. It commemorates the Prophet Ibrahim's readiness to sacrifice his first born son Ishmael.

Nowadays, the holiday celebrates commitment, obedience and self-sacrifice in the name of Allah. As a symbol of Ibrahim's sacrifice, all Muslims who can afford it must slaughter a sheep or cow and distribute its meat equally among members of their family, friends and the poor.