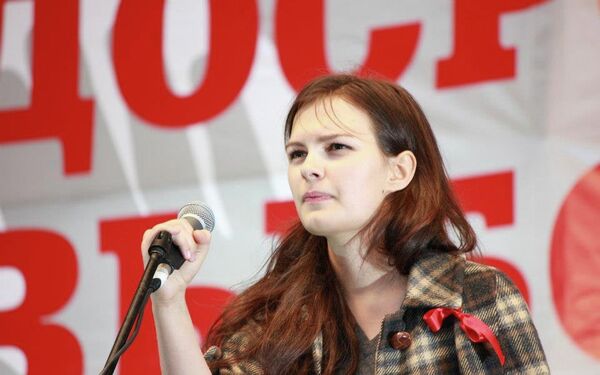 The collapse of the Soviet Union in 1991 appeared to have sounded the death knell for the ideas of Marx and Lenin in Russia, but just over two decades on, a new wave of young and increasingly visible socialist activists are eager to hoist the red flag over the Kremlin once more.

The collapse of the Soviet Union in 1991 appeared to have sounded the death knell for the ideas of Marx and Lenin in Russia, but just over two decades on, a new wave of young and increasingly visible socialist activists are eager to hoist the red flag over the Kremlin once more.

“I became interested in socialism when I was in my late teens,” said Isabel Magkoeva, 21, a rising star of Russia’s left and an activist with the Revolutionary Socialist Movement.

“I was always concerned by economic inequality and started to ask questions about why this should be. Then I got interested in left-wing literature,” added Magkoeva, a former teenage model who bears a striking resemblance to high-profile Chilean student protest leader Camila Vallejo. “That was when I realized I wanted to get involved.”

But although Magkoeva praises Lenin as a “great revolutionary,” she has few illusions about the Soviet Union, which ceased to exist the same year she was born.

“There was no genuine socialism in the Soviet Union,” she said. “And it is inaccurate to portray us all as seeking a return to the past. That simply isn’t true. We are for a new modernized form of socialism.”

This increase in the popularity of socialist ideas has been bolstered, in part, by Russia’s appalling record on wealth inequality, highlighted earlier this month by a report by the Swiss financial services company Credit Suisse.

“Excluding small Caribbean nations with resident billionaires, wealth inequality in Russia is the highest in the world,” the report said. “Worldwide, billionaires collectively account for less than 2% of total household wealth; in Russia today, around 100 billionaires own 30% of all personal assets.”

It is figures like this that, activists say, have attracted young Russians to socialist groups. Young left-wingers have been among the main movers in the unprecedented protests against the almost 13-year-rule of President Vladimir Putin, bucking an over-two-decade long trend that had seen unreformed, elderly Soviet-era communists as almost the sole champions of socialist causes.

“Young people have almost no chance to buy affordable housing and bring up a family normally. There is almost no opportunity for people to climb the social ladder, especially for those who are not from Moscow,” said activist Sergei Fomchenkov, 38, a leading member of the Other Russia movement.

“And so when people see all this, and then see a small group of incredibly wealthy billionaires building themselves luxury villas and so on, of course they start to see leftist ideas as a real alternative,” he added.

But, like Magkoeva, Fomchenkov has no desire to see Russia return to its Soviet past.

“We want a modernized form of socialism in which the state controls national industry, but not small businesses,” he stressed. “It would be lunacy to attempt to control the activities of every small café, for example.”

Analysts tie this rise in socialist ideas in Russia into a similar trend in a crisis-hit Europe, where leftist parties have made dramatic gains in an increasingly polarized political atmosphere.

“Like everywhere in Europe, vulnerable young people hit by the global economic crisis are rediscovering the ideas of socialism,” said Lilia Shevtsova, an analyst at the Moscow-based Carnegie Center think tank. “These ideas were discredited in Russia in the period after the collapse of the Soviet Union, but young people are today moving toward the new left.”

The most high-profile of this new generation of leftists, Sergei Udaltsov, made international headlines last week when he was charged with planning mass disorder across Russia on the basis of grainy footage broadcast by a pro-Kremlin channel.

Left Front leader Udaltsov, 36, a fiery, shaven-head activist who has been one of the main players in ongoing anti-Kremlin street protests, could face up to ten years behind bars if convicted on the charges, which he denies. Udaltsov was released by investigators on a pledge not to leave Moscow, but two other Left Front activists remain in custody waiting trial.

“It’s no coincidence that the Left Front movement was targeted,” activist Alexei Sakhnin told journalists after Udaltsov had been freed on a pledge not to leave Moscow. “The Left Front is the only group to have addressed social issues such as rising utility costs, which is something that millions of Russians suffer from every day.”

And the movement’s rhetoric seems to have struck a chord with many Russians. A public opinion survey by state-pollster VTsIOM indicated that Udaltsov was the only high-profile protest leader to have seen his popularity ratings increase since Putin’s election to a third term in March.

“Left wing groups in Russia openly sought a return to a socialism system in the 1990s, but they were entirely discredited,” said Left Front co-founder Ilya Ponomaryov. “But people have now again begun to see leftist ideas as a real alternative and it’s a very positive sign that more and more young people are getting involved.”

But he dismissed suggestions that history has proven it is impossible to build a viable society on the principles of socialism and communism.

“They all got Marx and Engels wrong,” he said, referring to previous failed attempts to construct socialist states. “You have to get the economic approach right first, before you can build a socialist country.”

Putin once famously called the Soviet Union’s collapse “the greatest geo-political catastrophe” of the 20th century, tapping into a pervasive nostalgia for the Soviet era among the older generation.

And avowed Putin foe Gennady Gudkov, a former KGB officer turned Kremlin critic, told RIA Novosti earlier this year that he shared the president’s views. “We could have kept the country together,” he said.

“It was strong state with many social guarantees, but there was far too much bureaucracy,” he said. “But it’s clear things were better in the Soviet Union than they are now.”

“There was no freedom of speech or human rights back then, but there isn’t any now, either,” he said.

This widespread respect for the Soviet past has translated into voter support for the Communist Party, the second largest political party in parliament.

But activists like Magkoeva, who spent the weekend collecting money for “political prisoners” at a two-day opposition rally in central Moscow, have little time for the party, whose veteran leader, Gennady Zyuganov, has lost four presidential elections since the break-up of the Soviet Union.

“Today’s Communist Party may praise the Soviet Union, but it has little in common with left-wing ideas,” she said. “It is an opposition for show only, which does not shy away from using the most populist ideas, from small business to Orthodox Christianity, to attract supporters.”

And it is the socialist fervor of Magkoeva and her comrades that many analysts see as the biggest threat to Putin’s grip on power.

“A few years ago, it seemed that nationalist groups posed the greatest danger to the authorities,” said Shevtsova, the Carnegie Center analyst. “But now it is clear that it is the new left.”