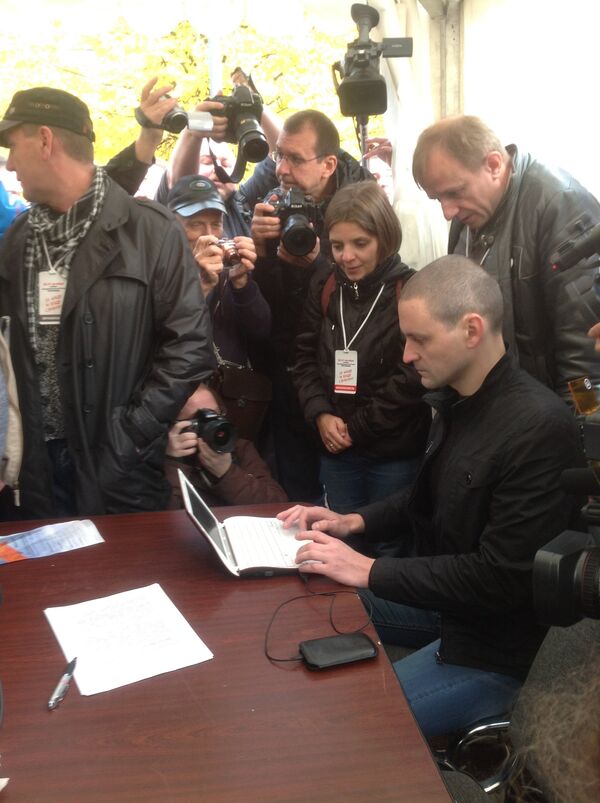 © RIA Novosti . Svetlana Antonchenko
Subscribe
International
India
Africa
Over 60,000 people across Russia had voted for candidates for the Opposition Coordination Committee in Moscow this weekend, by the time polling closed on Sunday night at 9 p.m., the Committee said.

Over 60,000 people across Russia had voted for candidates for the Opposition Coordination Committee in Moscow this weekend, by the time polling closed on Sunday night at 9 p.m., the Committee said.

The Committee's website registered 61,140 votes, from the 170,000 who had registered to vote, of which 96,000 had been verified. Around 200 candidates stood in the election for 45 places on the Committee.

Another 2,100 voted in person at the polling station set up in Moscow's Trubnaya Square

Voting took place in parallel both online and offline at specially organized voting offices across the Russian regions.

Committee chairman Leonid Volkov told RIA Novosti the results will be declared on Monday at 8 p.m. local time, and the names of those elected to the committee will be posted on its website.

Earlier, the website for electronic voting was forced offline by hacking after polling began at 8:00 a.m.

“The authorities are attempting to sabotage the polls,” opposition leader Alexei Navalny wrote on Twitter.

"The aim of the elections is to form a political representation for people who are not indifferent, who want change in Russia's political life," the Committee said on its website. Some of Russia's leading opposition figures such as Boris Nemtsov, Sergei Udaltsov, Garry Kasparov and Ilya Yashin took part in the vote.

Of Russia's established political parties in parliament, only the Communist Pary (KPRF) has said it is ready to work with the Opposition Coordination Committee, while all the others have said it does not represent a real political force.