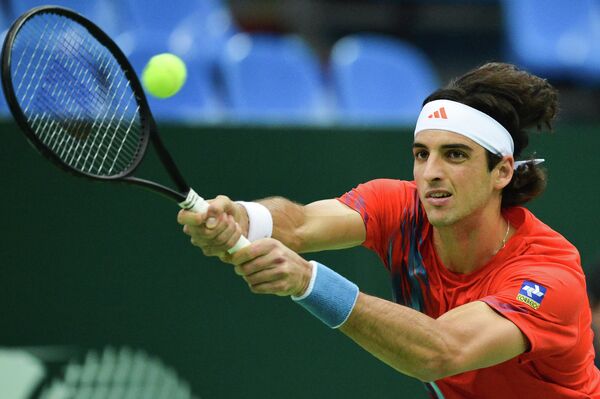 © RIA Novosti . Alexander Vilf
/
Go to the photo bank
Subscribe
Brazilian No. 1 Thomaz Bellucci beat big-serving Croatian veteran Ivo Karlovic on Saturday and won through to face Italy's Andreas Seppi in the final of the Kremlin Cup in Moscow.

Brazilian No. 1 Thomaz Bellucci beat big-serving Croatian veteran Ivo Karlovic on Saturday and won through to face Italy's Andreas Seppi in the final of the Kremlin Cup in Moscow.

Fourth seed Bellucci came back from a set down to take the semifinal to a decider before errors from Karlovic allowed him to complete a 6-7(4), 6-4, 6-4 win.

"I was really playing under pressure so for me it's very special," Bellucci said of his first indoor semifinal win.

"Tomorrow it will be a completely different match," Bellucci said.

"It's going to be a lot of rallies. Seppi's very good playing the baseline, so it will be very tough for me to beat him."

The first set went with serve all the way before Karlovic squeezed out Bellucci in the tiebreak.

In the second, Bellucci had a break point at 3-2 up was Karlovic saved with an ace. A series of unforced errors from the Croatian gave Bellucci the set on Karlovic's serve five games later.

Karlovic's first semifinal of 2012 ended when errors gave Bellucci the match point at 5-4 down, before the Croatian faulted and then hit wide off Bellucci's return from the second serve to end the match.

Karlovic had won both of the pair's previous meetings, both played on hard courts in 2008.

The 33-year-old Croatian is eyeing the prospect of a fifth career title and his first since Nottingham in 2008, and last appeared in an ATP final in Delray Beach in 2010.

Bellucci, 24, is chasing his second title in four finals this season after winning in Gstaad in July. Victory in Moscow would be the fourth title of his ATP career.