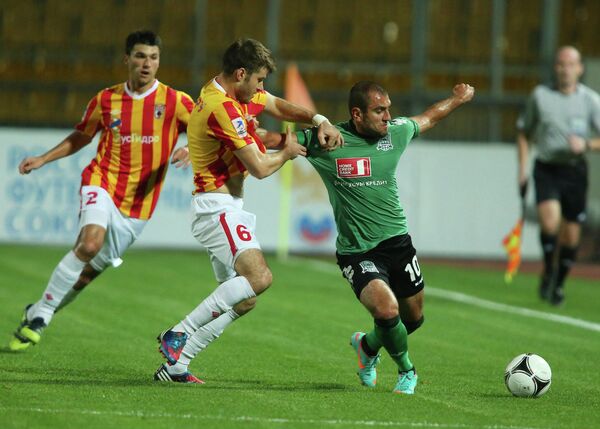 © RIA Novosti . Vitaly Timkov
/
Go to the photo bank
Subscribe
FC Krasnodar beat Alania Vladikavkaz 2-0 at home on Saturday in the Rusian Premier League with a brace of second-half goals.

FC Krasnodar beat Alania Vladikavkaz 2-0 at home on Saturday in the Rusian Premier League with a brace of second-half goals.

Krasnodar go ninth in the table, while Alania are 12th of 16 teams, without a victory in their last eight games.

Evgeny Shipitsin broke the deadlock in a largely cagey encounter on 71 minutes when he pounced on a rebound from a Nemanja Tubic header that had struck the post.

Nikola Drincic sealed the victory late on with a curling strike from 25 yards which caught Alania goalkeeper Dmitri Khomich off-guard.

The match pitted together the Russian Premier League's joint top scorers, Krasnodar's Yura Movsisyan and Alania's Danilo Neco, but neither enjoyed much luck in front of goal.

The game started with two free-kicks on either side of the pitch, with Drincic and Vladimir Khozin sending their efforts wide.

Four minutes later Yura Movsisyan outpaced the defense to meet a long ball in the area, but his first touch was poor and the ball ended up in Khomich’s hands.

On 36 minutes, former Watford forward Tamas Priskin cut inside from the left to shoot from the edge of the six-yard box, but Sinitsyn deflected the effort out for a corner, and saved Priskin’s 12-yard volley four minutes later.

Three minutes after the restart, Ignatyev blazed over from point-blank range before Shipitsin sent the ball over the bar on 56 minutes.

After Shipitsin put the hosts ahead, Alania's Diego Mauricio tested Sinitsyn from 15 yards, but the keeper had little trouble turning the strike round the post for a corner.