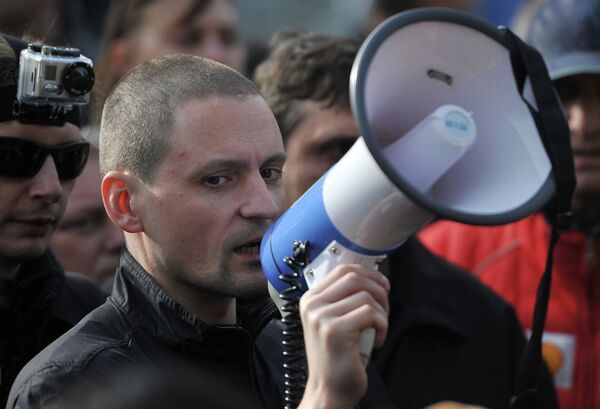 Russia’s beleaguered anti-Putin opposition launched nationwide polls on Saturday to elect leaders and breathe new life into its ten-month-old protest movement, but voting was disrupted by a massive cyber attack.

Russia’s beleaguered anti-Putin opposition launched nationwide polls on Saturday to elect leaders and breathe new life into its ten-month-old protest movement, but voting was disrupted by a massive cyber attack.

More than 165,000 people have registered to vote electronically to choose 45 people to run the opposition’s Coordinating Committee. Over 200 candidates, from opposition figurehead Alexei Navalny and fiery Left Front leader Sergei Udaltsov to little known civil activists are standing in the October 20-21 polls.

But the website for electronic voting was forced offline by hacking after polling began at 8:00 am (4:00 am GMT).

“The authorities are attempting to sabotage the polls,” Navalny wrote on Twitter.

Voting also took place on Saturday in a central Moscow square, and queues formed outside around half a dozen white makeshift polling stations. The square was surrounded by over ten police trucks and pro-Kremlin groups also picketed the entrance.

“This is the only place we get to vote for real. Official elections are a joke,” said Yury Uraganov, 48, an electrician. “I’m not sure how much influence the Coordinating Committee will have, but we have to do something.”

State media has largely ignored or criticized the polls and parliamentary parties, with the exception of the Communists, have said they will not work with its leaders.

“Yesterday, the Kremlin’s political analysts were telling us how insignificant our elections are. And today FSB agents are visiting our polling station,” current committee chairman Leonid Volkov tweeted.

Fifteen seats on the Coordinating Committee are reserved for the three main opposition groups - liberals, left-wingers and nationalists. The remaining 30 seats will be elected from a list of candidates unaffiliated with any of these groupings.

“I’m concerned, of course, that nationalists and the radical left will get on the committee,” said student Kirill Antonov, 21, as he queued to vote in central Moscow. “But right now we have to focus on our common goal.”

Navalny says the vote will provide the opposition with legitimacy that he says President Vladimir Putin and the ruling United Russia party lack because of allegations of widespread electoral violations at the most recent presidential and parliamentary polls.

The vote is also intended to give a boost to the protest movement, which has lost momentum since Putin’s presidential inauguration in May.

Putin has mocked the unprecedented opposition to his almost 13-year-rule, calling protesters Western-backed, chattering monkeys. He also said the opposition has failed to set out clearly its demands and that it has no official representatives he can talk to.

Voting to the committee came just days after Udaltsov, the Left Front leader, was charged with organizing mass disorder – a charge that could see him face up to ten years behind bars. Udaltsov was freed by investigators on Tuesday on a pledge not to leave Moscow, but his aide, Konstantin Lebedev, has been retained in custody.

The charges were based on grainy, low-quality footage aired by the state-run NTV channel of what the station said was Udaltsov discussing plans for a coup with a Georgian politician. Udaltsov says the footage is fake and the charges against him are “lunacy.”

Navalny also faces up to ten years behind bars after investigators charged him with large-scale embezzlement earlier this year. The probe into the 2009 case had been closed twice without charges before it was reopened this summer.

A host of other opposition figures have faced legal problems since Putin’s return to the Kremlin. But Putin has denied a crackdown against dissent is underway, saying last month that everyone must “comply with the law.”