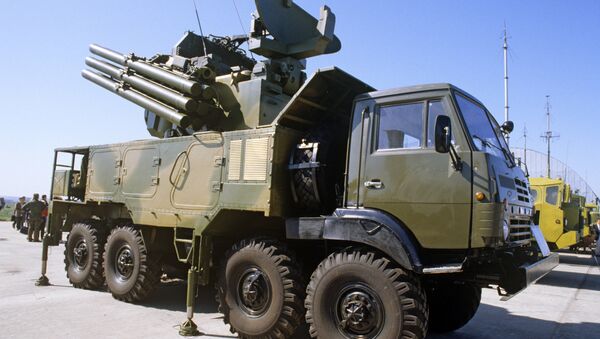 Two missiles fired from a Pantsir-S short-range air defense system shot down a cruise missile during tests at a practice range in northern Russia on Friday.

Two missiles fired from a Pantsir-S short-range air defense system shot down a cruise missile during tests at a practice range in northern Russia on Friday, the Defense Ministry said.

A real cruise missile was launched from a Tu-95MS Bear strategic bomber targeting a building 800 kilometers (500 miles) away.

“The Pantsir-S hit the target with two missiles and prevented the destruction of the defended building,” the Ministry said in a statement.

“The live firing practice at the Pemboy range has confirmed high performance characteristics of the new air defense system,” the statement said.

The system has previously only been tested against practice targets imitating cruise missiles.

Cruise missiles represent a difficult target as they are small, fast-moving, can fly at very low levels and often have a low infrared and radar signature.

The Pantsir-S, produced by Russia's KBP, is a gun-missile system combining a wheeled vehicle mounting a fire-control radar and electro-optical sensor, two 30-mm cannons and up to 12 57E6 radio-command guided short-range missiles, and is designed to take on a variety of targets flying at low altitudes.

The Defense Ministry has so far ordered 100 Pantsir-S units for Russia’s Aerospace Defense Forces, which are expected to be delivered in the next few years.

The export version of the system, Pantsir-S1, has been sold to the United Arab Emirates, Syria and Algeria.

Under a recent $4.2-bln arms contract with Iraq, Moscow will supply Baghdad with 50 Pansir-S1 systems.