Opposition to Vote in Self-Styled Elections 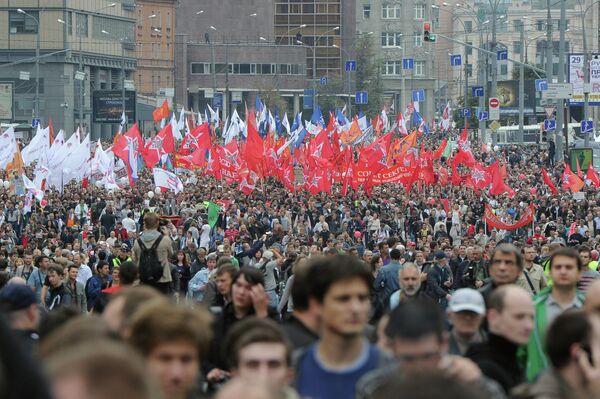 Russia’s fledgling street opposition will hold elections this weekend in the first attempt to unite its disparate factions under one umbrella and put forward concrete leaders.

Russia’s fledgling street opposition will hold elections this weekend in the first attempt to unite its disparate factions under one umbrella and put forward concrete leaders.

But as the anti-Kremlin protest movement prepares for its most ambitious effort to date, experts on Friday cast doubt over how successful the opposition coordinating committee will be.

“An attempt to come to power by winning people’s trust is one thing, but an attempt to forge a parallel people who claim power entirely on themselves is another,” said political expert Mikhail Remizov, president of the Institute of National Strategy.

More than 165,000 people have registered to vote electronically for around 200 candidates to the committee, which claims it is following up on the 10-month-old protest movement’s demand for free elections and fair representation.

The committee will be comprised of civic activists, liberals, leftists and nationalists. The 45-seat council, in which 30 seats will go to civic activists while five will go to each of the political forces, is also aimed at representing the movement in the case of a potential dialogue with the authorities.

President Vladimir Putin has regularly slammed the protest movement, which erupted after last December’s hotly contested parliamentary elections, for its inability to offer up a leader as well as unified, constructive criticism of the government.

But other experts said there is no guarantee the Kremlin will pay heed to the movement’s democratically elected leaders.

Political analyst Pavel Salin said Friday that even if the opposition managed to unite around a single leader, let alone 45, that person’s representation would nevertheless be called into question.

“If he wins the support of around 100,000 Muscovites, then there’s no point for the government to open up a dialogue with him,” he said, pointing to the urban middle-class that will largely anchor the vote.

Oleg Kozyrev, however, a blogger running for election under the social activist ticket, deflected experts’ criticism about the relatively small amount of voters involved.

“It’s very simple: these are the most legitimate elections in Russia to date,” he said. “Show me another election in which 100,000 voters choose their representatives completely honestly.”

Regardless of the turnout, there are signs the authorities are taking notice. While senior officials have kept mum over the vote, pro-Kremlin youth group Nashi has announced it will dispatch observers to monitor the vote.

The poll is also an exercise in logistical organization for the movement. Until now, its efforts have been devoted to staging the mass rallies that grabbed international headlines earlier this year but have since lost much of their luster.

The broad spectrum of political and ideological persuasions represented in the movement has thus far complicated earlier efforts at organization. The diversity reflected among the opposition candidates poses a fresh challenge to the movement’s unity.

Besides the four broad electoral categories, election candidates also belong to a handful of blocs, such as the Green, Progressive and Social blocs, among others.

Dmitry Dyomushkin, head of the outlawed Slavic Union and a nationalist candidate, acknowledged the vast – and, often, acrimonious – differences among the factions.

But he added that “democracy” means working together, regardless of conflict.

“We support broad social demands – freedom, fair access to media, the opening of the political system and so on,” he said. “But if the system has been closed for everyone, then what difference does it make who doesn’t like who?”

Other candidates said maintaining ideological discipline within the protest movement is a key element.

Alexei Sakhnin, a senior member of Left Front and running on the leftist ticket, slammed what he believes to be a growing presence of “irresponsible populism” in the movement.

“We don’t want a repeat of what happened with [first Russian President] Boris Yeltsin, who emerged from the democratic movement to grab power, only to renege on it later,” Sakhnin said.

Each of the candidates paid a 10,000-ruble ($325) fee to run in the elections. Voters, meanwhile registered through the movement’s central election committee website.

The all-electronic voting will be held online and at polling stations across a handful of Russian regions.

According to Internet entrepreneur Anton Nossik, an advisor to the opposition’s election commission, the protest movement is entering “completely uncharted territory” with its electronic voting.

Citing Putin’s recent proposal to submit to the State Duma bills that have garnered more than 100,000 votes online, he said the elections could pave the way for federal electronic voting that would minimize the opportunities for falsification.

“Here, we have the mechanism for this,” Nossik said Friday.