Pussy Riot’s Samutsevich: ‘For Me, Russia Is Like A Big Prison’ 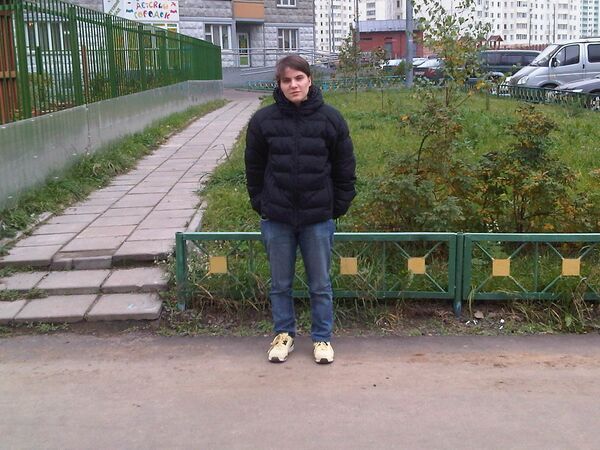 After almost seven months in a Moscow pre-trial detention center, Pussy Riot member Yekaterina Samutsevich has a lot to catch up with, not least the full extent of the international row that raged over the all-female group’s arrest and high-profile trial.

After almost seven months in a Moscow pre-trial detention center, Pussy Riot member Yekaterina Samutsevich has a lot to catch up with, not least the full extent of the international row that raged over the all-female group’s arrest and high-profile trial.

“People don’t seem to be able to grasp that there is no Internet in a pre-trial detention center,” Samutsevich, 30, says as she sips coffee in a Moscow suburb café. “It was really tough to find out what was going on – although I saw on TV that Madonna had supported us.”

“But I’ve noticed people looking at me since I got out,” she adds. “We were sitting in a café the other day and some people were taking photos.”

“Someone even sent over a glass of Hennessy,” she smiles.

While Samutsevich may still not be up to speed with the aftermath of the group’s controversial performance in Moscow’s biggest cathedral this spring, she says she has had ample time to come to an understanding of the current political situation in Vladimir Putin’s Russia.

“But, you know, there’s not that much difference between prison and the outside world,” she goes on. “Russia is like one big prison. In or out, you are always under someone else’s control.”

Samutsevich, Nadezhda Tolokonnikova, 22, and Maria Alyokhina, 24, were charged with “hooliganism aimed at inciting religious hatred” over their cathedral protest and sentenced to two years each on August 17 after a trial that made global media headlines.

Opposition figurehead Alexei Navalny said in the stormy aftermath of the trial that President Vladimir Putin “wrote the verdict.” And Samutsevich refuses to rule out that the former KGB officer took a personal interest in the case.

“Why not?” she says, shrugging. “I’m sure he was involved to some extent – everyone knows in Russia that judges don’t make any important decisions without an order from above.”

Putin told state television ahead of the group’s appeal that the jailed Pussy Riot members had “got what they asked for,” but denied he had played any direct role in the case.

But Prime Minister Dmitry Medvedev said in late September the group should be freed from prison and their imprisonment was not in the public interest.

Samutsevich, who is also a member of radical guerrilla art group Voina, rejects suggestions however that her release was in any way connected to Medvedev’s comments.

“I don’t think Medvedev’s words carry any real weight,” she says. “But I don’t have any definite explanation as to why I was released – perhaps it was a result of international pressure. Maybe they wanted to take the heat off a little bit.”

‘I Would Have Apologized’

World stars such as US pop diva Madonna, ex-Beatle Paul McCartney and Sting made statements in support of the group ahead of their trial, and the three defendants were also recognized as prisoners of conscience by Amnesty International.

But while Pussy Riot may have been feted in the West, things were very different in Russia. A poll released by the independent, Moscow-based Levada Center indicated earlier this month that 43 percent of Russians considered a two-year sentence too light.

But Samutsevich suggests such harsh attitudes were the result of what she believes was a sustained campaign by the authorities against the group.

“State television poisoned people against us and presented our protest as if we were a bunch of blasphemers who deliberately set out to offend believers,” she says.

And she reserves particular scorn for a documentary aired by state-run NTV last month that alleged the group was part of a foreign-funded “demonic” plot to destabilize Russia.

“I’ve had time to watch that NTV documentary,” she says, speaking over the noise of a soap opera blazing from the café’s plasma television screen. “It was disgusting to see how they are ready to lie without any shame whatsoever.”

“The authorities are trying to make out that it is all about a conflict between Orthodox Christians and Pussy Riot. But that’s not the case,” Samutsevich says. “We have nothing against religion.”

The group’s protest was triggered by comments by the head of Russia’s powerful Orthodox Church, Patriarch Kirill, who dubbed Putin’s first two Kremlin terms a “miracle of God” in the run-up to the March 4 presidential terms.

Samutsevich recognizes that the group’s performance of a song called “Holy S**t” at the altar of the country’s main cathedral had the potential to offend “people who don’t know the truth of what is going on.”

“But we deliberately chose to go into the cathedral at a time when there was no service going on and very few people there. We left as soon as security asked us to. If anyone there had come up to me and said why did you do that? I would have apologized.”

“And we have had lots of support from Orthodox believers who think the church is too far removed from religion, that it’s engaged too much with other things,” she adds.

Samutsevich declines to reveal her own views on religion.

“I don’t want to answer that question and raise again the religious theme that the authorities have been using against us,” she says. “But, hypothetically, yeah, I think God would have approved of our actions.”

The Pussy Riot row also sparked a rise in Orthodox militancy, with fringe groups announcing plans to patrol near churches to protect them from “desecration.” In incidents in Moscow last month, Orthodox activists in Moscow tore a Pussy Riot T-shirt off a member of the public and harassed staff at a downtown museum of erotica. And, last week, a Moscow gay bar was attacked by suspected radical religious activists.

But Samutsevich says she feels no fear.

“I don’t feel afraid. I haven’t seen any of those Orthodox religious activists everyone is talking about,” she said. “And, you know, I think that the authorities have just tried to use these activists to make out that all believers are against Pussy Riot.”

Samutsevich was released on October 10 after a Moscow appeal court accepted her new lawyer’s argument that she was seized by security guards before she had time to take part in the group’s protest.

But the court said fellow Pussy Riot members must serve out their sentences and the two women are now set to be transferred to a penal colony far from Moscow.

Samutsevich rejected the services of the group’s stridently anti-Kremlin defense team earlier this month, replacing them with a lawyer who avoided any mention of politics in her appeal.

She dismisses suggestions, however, that her decision to unilaterally plump for a less politicized legal representative was in any way an admission that the group’s actions were a crime.

“This line of defense was offered at the first trial,” she says. “So there was no change – this point was just set out a lot more clearly at the appeal. And, look, I have not admitted my guilt – this was a political act and we were jailed for our political views.”

“There is no split,” she says.

Passivity is in the Blood

Despite Pussy Riot's now-famous call for the Virgin Mary to “drive Putin out,” Samutsevich is remarkably restrained when asked what the former KGB officer means to her.

“It’s all a bit more complicated than saying simply ‘Putin is the symbol of evil,’” she laughs.

“We are against the authorities – not Putin, specifically. I have no desire to meet Putin – and even if I did I’m pretty sure my opinion wouldn’t change,” she says. “I’m against the whole way the authorities manipulate society, and our entire system of education, which doesn’t teach people to think for themselves.”

“I’ve never been to the West,” she goes on. “But it’s clear why we were so accepted there. Our protest was in a form that was instantly recognizable. And in the West people are used to fighting for their rights.

“Also, in the West there is the idea that Putin is one of the most macho world leaders, and so it was a very attractive image there for people to see his regime being taken on by a group of feminists.”

And Samutsevich suggests the Russian people’s well-documented capacity to endure hard times has historical roots, recalling the atmosphere of fear that she says was widespread even in the decade before the collapse of the Soviet Union.

“You have to look at our history, especially the Soviet era,” she explains. “People were taught to stay quiet, to avoid any unpleasantness. I remember in my childhood, my father would always warn me not to say anything bad about the authorities. Parents taught their children not to even criticize our previous leaders, like Lenin and Stalin.

“This passivity is installed in people at a young age,’ she adds.

“People are just taught from generation to generation that we need a strong leader - that we should just go to work and not think about anything. Very few people have a chance to educate themselves.”

As a member of a group that lists the US punk rock Riot Girl movement among its main influences, Samutsevich says she found the constant exposure to commercial radio in jail “a real torture.”

“They had all this crap pop music on all day,” she recalls, wrinkling her nose with distaste. “That was tough to take.”

But she says, despite public hostility to the group’s performance, she experienced no real problems with her cellmates, who were serving time for economic crimes.

“They supported me after we’d got to know each other a bit. Lots of people are angry about what is going on in the country, but they don’t know how to change things.

“As for the guards, some of them supported me openly, but others envied our fame, especially when the trial started and we were on television every five minutes or so. They were like 'we’ll show you what a big star you are.'”

“It’s not true that we deliberately got arrested to spread our message,” Samutsevich says. “But I didn’t go to prison in vain. The world got to see how our legal system works. Plus, everyone got to see that Putin was lying when he said we have an independent legal system.”

And Samutsevich says she has no intention of abandoning her fight against what she sees as an authoritarian system.

“I’m going to be more careful – but that doesn’t mean I’m just going to sit at home and do nothing.”

“And, besides, my term of probation ends in 18 months. And after that I’ll be able to do what I want again!” she laughs, before heading back out into the concrete chaos of the Moscow suburbs.