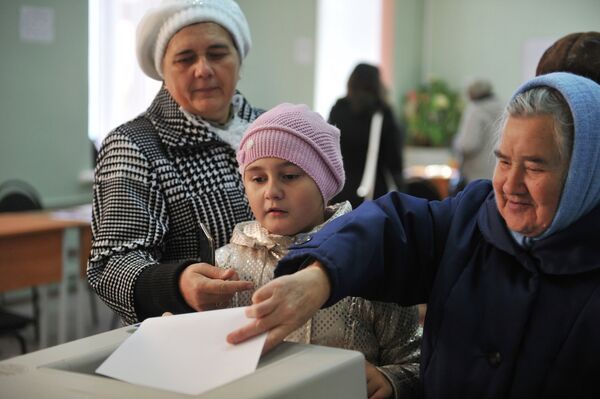 © RIA Novosti . Alexey Kudenko
/
Go to the photo bank
Subscribe
As polling stations across the country close and the votes are counted, one issue is already apparent: low turnout.

As polling stations across the country close and the votes are counted, one issue is already apparent: low turnout.

United Russia leader, and Russia’s Prime Minister, Dmitry Medvedev has congratulated his party on performing better than it did in December’s parliamentary elections.

“I’ll say it straight, United Russia did well. Better than in December’s parliamentary elections” Medvedev said during a videoconference with regional party officials on Sunday.

However, low turnout was seen in Moscow’s suburbs, the Far East, and other regions. Kamchatka saw the lowest turnout in a gubernatorial election for 15 years: by 6 p.m. local time not even 15 percent of the electorate had voted. In the Primorye Territory, two hours before the polls closed, just under 11 percent of voters had cast their ballots.

This, Andrei Zudin, from the Center for Current Politics, believes, is down to “election fatigue.”

“The first cause is the basic fatigue that people feel when confronted with more elections, because these are the third in nine months,” he said. This on top of the fact that fewer people tend to come out to vote in local and regional elections than in national ones, he added.

The third reason Zudin gives is that people do not feel that their local authorities have much real power, supporting this thesis with statistics showing higher turnout for directly elected governors, than in local elections.

In five regions Russians went to the polls to elect their governors for the first time since the practice was reintroduced by electoral reforms passed during Medvedev's time as President. Turnout in these regions was significantly higher, topping 50 percent in Belgorod Region by 6 p.m, and over 33 percent in the others.

The turnout issue has not just been noted by analysts. Sergei Neverov, senior United Russia party official in the Far East, went on record as saying, perhaps optimistically, that “undoubtedly, had more people come out to vote, then United Russia’s results would have been higher.”

However, Alexei Chesnakov, also of the Center for Current Politics, takes a more optimistic view of low turnout, seeing as a sign – not of apathy, but of faith in the powers that be.

“The low turnout we’ve seen in several regions speaks more to the people’s trust in the authorities, and that they do not want to see any change in political direction,” he said.

Independent vote monitors have raised concerns about "violations" during these elections, and although the election commission has vowed to investigate each and every allegation, this vote, much like those in December, remains tarnished by accusations of procedural violations and vote-rigging.

The main parties have done little to allay these concerns: the United Russia party and the Communist Party went on the record on Sunday night, openly trading accusations of impropriety.