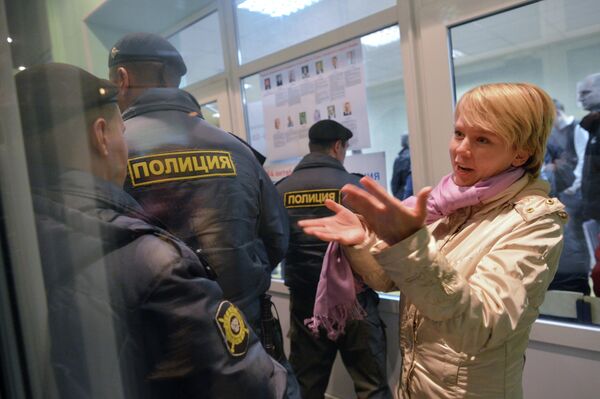 Key mayoral polls were dubbed “illegitimate” on Sunday by an anti-Putin protest leader seeking election in the sizeable Moscow suburb of Khimki.

“I’m going to tell the world just how dirty these elections are,” raged protest leader Yevgeniya Chirikova, 35, as she left a polling station. “We are seeing a massive falsification of the vote.”

Exit polls published by state-run pollster VTsIOM indicated that acting mayor, Oleg Shakhov, who is backed by the ruling United Russia party, would take around 44 percent of the vote, with Chirikova coming second with around half that amount. Those results would be broadly in line with opinion polls published in the run-up to Sunday’s hotly-contested elections in Khimki.

Voters went to polling stations across Russia’s nine time zones on Sunday, but attention was centered firmly on Khimki, a city of 200,000 just to the north of Moscow. Election officials said that 3,000 observers were spread across Khimki’s 72 polling stations. It was allegations of mass vote fraud at last December’s parliamentary elections that sparked unprecedented demonstrations against the rule of President Vladimir Putin.

The leaders of the 10-month-old anti-Putin protest movement hoped the Khimki mayoral polls would supply a morale-boosting and rare electoral triumph, and Chirikova was accompanied by opposition figurehead Alexei Navalny as she toured the city’s polling stations to consult with vote monitors.

Chirikova, an eco-activist who shot to fame over her opposition to the destruction of Khimki woodland to make way for a federal highway, alleged the authorities had doctored voter lists and threatened vote monitors to ensure victory for Shakhov.

"I'm certain they have decided just to do everything with pen and paper after the polls close," said Chirikova's campaign manager, Nikolai Lyasky.

Independent vote monitor Golos said it had registered vote violations at every fifth polling station in the town, a former Soviet military production hub that was closed to foreigners until two decades ago.

But Russia’s election committee accused Golos of publishing misleading information and said “every complaint” would be investigated.

Voters arriving at polling stations in Khimki complained angrily that telephone calls urging them to vote for acting mayor Shakhov had woken them up in the early hours for the last three nights.

But Shakhov blamed the calls and allegations of vote-rigging on “dirty tricks” by “one of my rival candidates.”

“All of this is a provocation,” he told journalists. “It’s all a show. They are playing a game, but they are going to lose.”

As voting wound down, Chirikova, Navalny and dozens of journalists rushed to a polling station at a Khimki school to confront two muscle-bound men that observers alleged had been “preventing” them from carrying out their work. After protracted talks, polling station officials disclosed that the men were monitors for heavy metal legend Sergei ‘Spider’ Troitsky, whose run for mayor Chirikova had said was a plot to detract attention from her bid.

Troitsky, whose election day headquarters were in a Spartak Moscow FC bar, had pledged flying saucers for Khimki residents if elected.

Turnout at the polls was around 25 percent and the low voting figures appeared to represent an apparent lack of enthusiasm for the candidates on offer.

“I voted for Chirikova, but I can’t say I like her – she has a mean face,” said Stepan Nevinsky, a banker who was with his wife and baby. “But she’s better than all the other candidates.”

Many people leaving polling stations refused to say who they had voted for.

“I’ll only tell you this – I didn’t vote for Chirikova. Like all true locals, I loathe her. She has no idea about politics,” said pensioner Olga Antonava.

Alongside Khimki, voting is going on in 77 of Russia’s 83 regions on Sunday.

The polls also mark the return of direct elections for regional governors, with votes taking place in five regions – Amur, Bryansk, Belgorod, Novgorod, and Ryazan. Direct gubernatorial polls were scrapped by Putin in 2005, but brought back as part of Kremlin electoral reforms that came into force on June 1.

Governors are being elected in only five of Russia’s regions because the Kremlin appointed new governors across the country earlier this year. These newly appointed governors will not now have to seek reelection for at least four years.

But opposition figures say they have been unable to get on the ballot in many regions due to Kremlin regulations obliging potential candidates to have their bid approved by between five and ten percent of municipal legislators (depending on the area). Opposition candidates allege regional legislators have come under pressure from Moscow to ignore their bids.