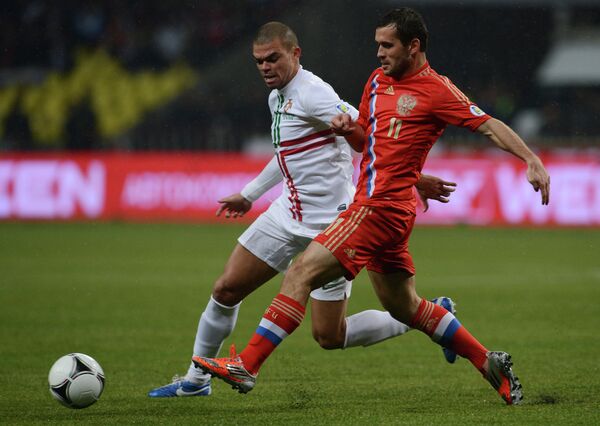 Alexander Kerzhakov's sixth-minute strike proved enough to give Russia a 1-0 home win over Portugal in a hard-fought World Cup qualifier in Moscow on Friday.

Alexander Kerzhakov's sixth-minute strike proved enough to give Russia a 1-0 home win over Portugal in a hard-fought World Cup qualifier in Moscow on Friday.

The win puts Russia clear at the top of Group F by three points from Portugal, ahead of games Tuesday for both teams.

Fabio Capello continued his 100 percent record in competitive fixtures as Russia coach, during which time his team have scored nine goals and conceded none in their three qualifiers for Brazil 2014.

"Today on the pitch I saw a Russia team that played with huge desire, huge commitment." Capello said.

"It was a difficult match."

Kerzhakov scored for Russia with the game's first shot, taking advantage of a large hole in the Portuguese defense to latch onto Roman Shirokov's through-ball and fire the ball over onrushing goalkeeper Rui Patricio.

Portugal struggled to find their way back into the game despite enjoying almost twice as much possession as Russia, and created few chances from open play in the face of a tenacious display from the hosts, especially in midfield.

"Maybe we weren't as calm as we usually are," Portugal coach Paulo Bento said.

After Kerzhakov's early goal, Portugal forced the hosts back into their own half and creating a string of dangerous chances from set pieces while Russia sat back and threatened on the counter-attack.

First Nani swung in a cross that narrowly failed to find a Portuguese player for a tap-in before Joao Pereira headed wide at a corner and a second corner saw Russian goalkeeper Igor Akinfeev dive to stop a header from Bruno Alves.

Russia's tough-tackling approach forced Portugal's Fabio Coentrao to limp off and be replaced by Miguel Lopes on 20 minutes.

Late in the first half, Kerzhakov hit the ball high over Rui Patricio's bar on the counter from another Shirokov pass.

An anonymous half for Cristiano Ronaldo ended with Portugal's star forward striking a poor free-kick at Akinfeev. He then blew a chance to equalize for Portugal on 58 minutes as he hesitated while inside the six-yard box and Sergei Ignashevich stole the ball from his feet.

Late on, Alexander Kokorin broke free of the Portugal defense and struck a shot that Rui Patricio could only parry into the path of Shirokov, whose mishit effort went wide.

At the other end, substitute Silvestre Valera could have equalized on 85 minutes but mistimed his effort to connect with Nani's cross at the far post.

Luxermbourg host Israel later Friday in the only other match in Group F.