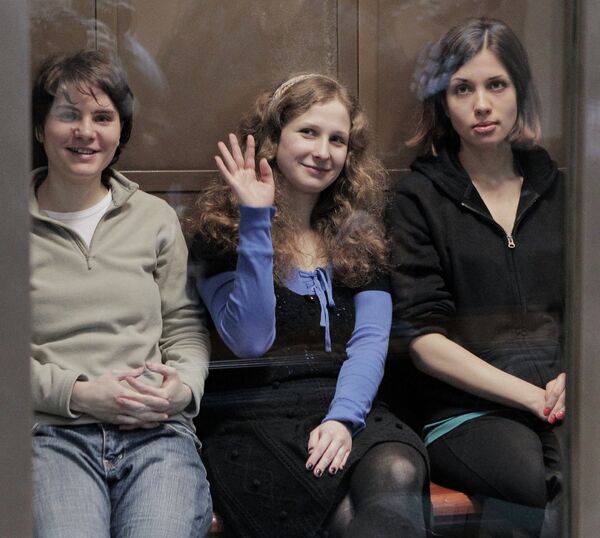 A Moscow court reduced the two-year prison sentence for Pussy Riot member Ekaterina Samutsevich to a suspended sentence at an appeal hearing on Wednesday, while her two convicted band mates had their sentences upheld.

Samutsevich, 30, walked out of the courtroom to freedom, while fellow group members Nadezhda Tolokonnikova, 22, and Maria Alyokhina, 24, are set to be transferred to a penal colony to serve out their two-year sentences.

"We are glad that Ekaterina Samutsevich has been freed, but we fail to see how her role significantly differed from those of the others," lawyer Mark Feygin said after the ruling.

He added that the defense team would appeal to the European Court of Human Rights.

Another lawyer, Nikolai Polozov, said he was surprised by the court's decision.

The original appeal hearing was delayed on October 1 when Samutsevich unexpectedly fired her lawyer, Violetta Volkova. The move sowed confusion and resulted in state prosecutors accusing the defendants of deliberately delaying the proceedings.

Samutsevich's new lawyer, Irina Khrunova, maintainted her client did not actually take part in the protest, noting security guards at the Christ the Savior Cathedral, where the group performed their controversial "punk prayer" in February, had grabbed her before she could join the other members.

Inside the courtroom Wednesday, the three women sat complacently in glass screened box as a handful of Russian special forces officers stood guard.

“We are in prison for our political beliefs,” Alyokhina said during the proceeding.

Samutsevich claimed she “had no intention of offending religious believers,” noting the group’s performance – in which they called for the Virgin Mary to “drive Putin out” – was “a purely political act.”

Feygin also accused President Vladimir Putin of “illegally influencing the court” in comments he made during a television program last weekend, in which he said the women received the proper punishment.

The appeal hearing followed a string of comments in recent weeks from both the government and the Russian Orthodox Church apparently aimed at finally putting the high-profile case to rest amid both domestic and international outcries.

Vladimir Legoida, head of the church’s Synodal Information Department, issued a call recently for the three women to “repent” in order to “benefit their souls.”

“Considering that the aim of punishment is correction…their repentance and rethinking of what they have done should be heard, and they should get a chance to embark upon the path of correction,” he said in a September 30 statement.

The three members were sentenced to prison on August 17 for their performance in Christ the Savior Cathedral, Moscow’s main Orthodox church, in a case that grabbed international headlines and sparked criticism of the Kremlin for what critics claim is a heavy-handed punishment for a light offense.