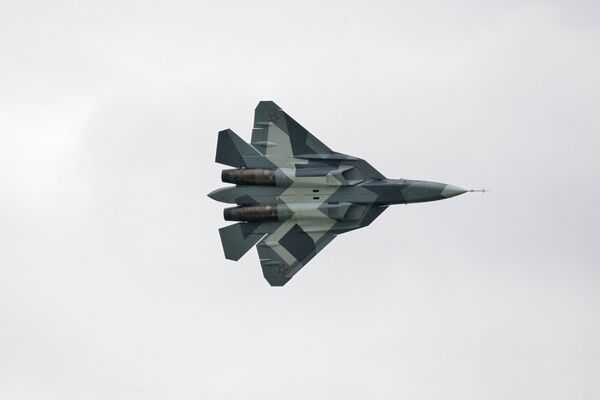 India will begin production of an export variant of Russian plane-maker Sukhoi's T-50 stealth fighter from 2020, Russian Defense Minister Anatoly Serdyukov said on Wednesday during a visit to Delhi.

India will begin production of an export variant of Russian plane-maker Sukhoi's T-50 stealth fighter from 2020, Russian Defense Minister Anatoly Serdyukov said on Wednesday during a visit to Delhi.

"The technical characteristics have been confirmed to our (Russia and India) defense ministries. We propose serial production of the plane should start by 2020," he said, following the meeting of an Indian-Russian intergovernmental commission.

T-50 is a prototype of a multirole stealth fighter jet currently undergoing flight testing by the Russian Air Force. The plane will feature an electronically-scanned active-array radar, supercruise capability, high maneuverability and low radar and infrared signatures. Sukhoi claims it will have significantly better performance than the US-designed Lockheed F-22 Raptor which is now in service.

Russia also hopes to sign a deal with India by the end of this year for an additional batch of 42 Sukhoi Su-30MKI fighter aircraft of an improved standard to those already in service in India, he said.

"Russia has presented India with a contract for delivery of another 42 Su-30MKI aircraft. I hope it will be signed by year-end," he said.

The new Su-30MKI will feature an advanced active electronically-scanned array radar system as well as modified electronic warfare systems and the ability to fire the land-attack variant of the BrahMos Russian-Indian supersonic cruise missile, according to Defence Industry Daily.

India already has around 130 of the advanced Su-30MKI's in service, as part of a major reequipment program for the service, including purchase of 126 French Dassault Rafale fighters.