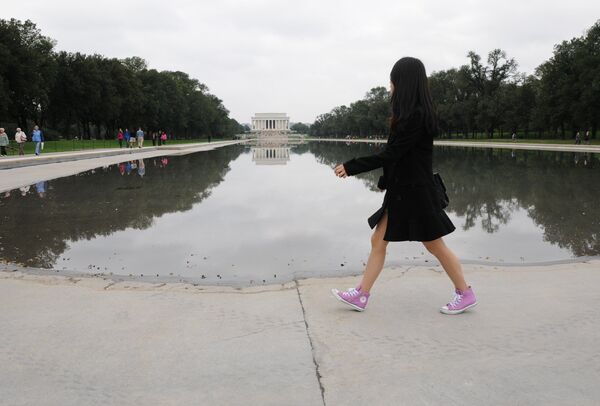 © RIA Novosti . Jaclyn O’Laughlin
Subscribe
They wanted a “green” solution. But planners were aghast when a $34 million overhaul of the Reflecting Pool, an iconic feature of the US capital’s graceful landscape, resulted in a mammoth trough filled with algae.

They wanted a “green” solution. But planners were aghast when a $34 million overhaul of the Reflecting Pool, an iconic feature of the US capital’s graceful landscape, resulted in a mammoth trough filled with algae.

“The algae is a formidable foe,” confessed Carol Johnson, spokeswoman for the National Park Service which oversees the pool and surrounding national monuments in Washington. “But we have absolutely no doubt we will be able to deal with this.”

And deal with it is exactly what aquatic biologists and park service workers have been doing this month after experts concluded that the best way to eliminate the green scum from the elegant pool was to drain it yet again and refill it with specially-treated water.

“We are working really hard to get this done as quickly as possible,” Johnson said, adding: “We are confident we have it right” this time. The National Park Service said it planned to have the Reflecting Pool entirely refilled, and algae-free, by the end of the week.

The pool, a narrow, 2,000-foot (610-metre) water-filled basin that extends between – and, from the right vantage point, reflects – the Lincoln Memorial and the Washington Monument near the Potomac River, is among must-see sites for millions of tourists who visit Washington each year.

The pool has in the past been filled using filtered water from the city’s drinking water supply. The overhaul this summer however included a new, environmentally-friendly filtration system allowing the pool to be filled from the Tidal Basin, a reservoir of river water on the Potomac.

Johnson admitted that the park service “knew there would be an adjustment phase” once the overhaul was completed and the new system launched for filling the pool, but said no one was prepared for the amount of green algae that appeared in the water last month.

Workers drained the pool last week and on Saturday began pumping new water from the Tidal Basin – specially treated to increase ozone levels and, in turn, neutralize phosphorus and nitrogen elements that allow algae growth – back into the trough.

The park service said it estimates the additional cost of re-draining the pool to be around $100,000 and stated that it expects that work to be completed by the end of the week.

“I walk here every day during lunch, and I noticed it was very green last week; it looked bad,” she said. “It looks much better now. But they should have done it right the first time.”