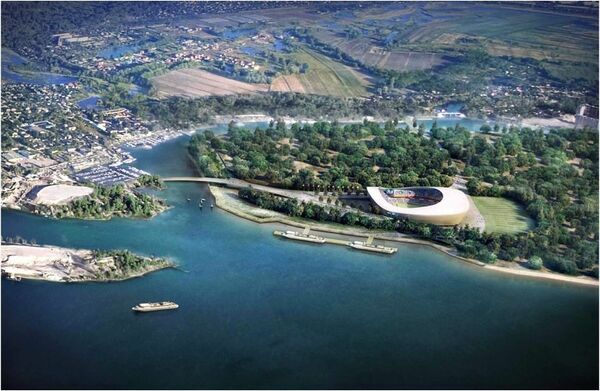 Authorities in the Russian city of Samara are earmarking $320 million for the construction of a 44,000-seater arena for the 2018 World Cup.

Authorities in the Russian city of Samara are earmarking $320 million for the construction of a 44,000-seater arena for the 2018 World Cup.

The central Russian city with a population of 1.2 million was among 11 to make the final list of host cities announced last week by FIFA and Russian organizers.

All of the 12 stadiums needed for the tournament require constructing from scratch or dramatic refurbishments to fall into line with FIFA standards.

Those costs were included into the total World Cup cost of $19.2 billion as announced by Sports Minister Vitaly Mutko last week.

Samara is likely to host group stage matches at its stadium, to be built on an island in the Volga River.

"We will announce a tender to undertake the pre-project documentation for the stadium bowl itself and the infrastructure, including access roads," the regional government quoted vice governor Alexander Nefedov as saying.

"The total amount of project work for the first stage will cost around 800 million rubles ($2.5 million)," he said.

Total spending on the stadium will amount to 10 billion rubles ($320 million), Nefedov said.

Some urban planners were skeptical about the possibility of constructing the stadium on an island in the Volga because it is a long way from the airport and there could be problems developing transport infrastructure, as well as the possible demolition of a number of historical buildings.

The 2018 World Cup is to take place in Moscow, which will host the final at Luzhniki stadium, as well as St. Petersburg, Sochi, Kazan, Yekaterinburg, Kaliningrad, Volgograd, Rostov-on-Don, Saransk, Samara and Nizhny Novgorod.

Earlier this week, authorities in Saransk declared they would need $1.9 billion for the tournament, while officials in Yekaterinburg put the figure for their city at over $3 billion.