The Town Where They Still Love Stalin 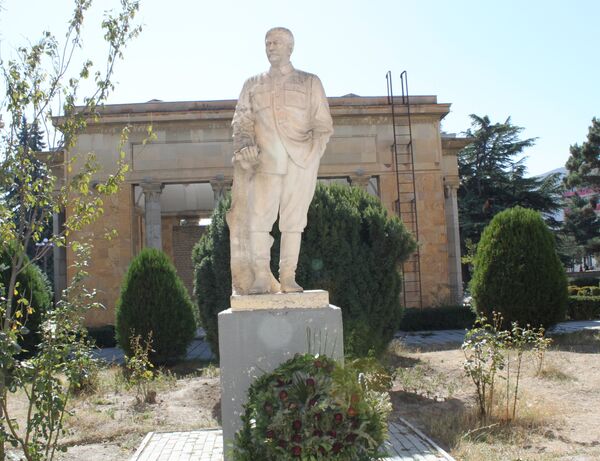 © RIA Novosti . Marc Bennetts
Subscribe
International
India
Africa
The world may know him as a bloodthirsty Soviet dictator responsible for millions of deaths, but to many people in his hometown of Gori, eastern Georgia, Joseph Stalin was simply a local boy made good.

The world may know him as a bloodthirsty Soviet dictator responsible for millions of deaths, but to many people in his hometown of Gori, eastern Georgia, Joseph Stalin was simply a local boy made good.

“I love him and my entire family does too,” smiled 19-year-old Nino Giorgadze as she stood on the city’s central Stalin Avenue. “I’ve heard about the repression and the gulags, of course, but I love him all the same.”

Born Iosif Vissarionovich Dzhugashvili in 1878, Stalin lived the first four years of his life in a modest wooden house in Gori, a small city some 40 miles from the Georgian capital of Tbilisi. His former home now stands in front of a two-story State Stalin Museum, opened by the dictator’s security chief and fellow Georgian, Lavrentiy Beria, in 1937, at the height of the Great Terror.

Historians estimate that anywhere between four and twenty million people were killed as a result of Stalin’s purges of his political enemies – real or imagined – but the museum in Gori skips over this bloody chapter of Soviet history almost entirely.

“Foreigners always ask me, ‘why is there no mention of the gulag?’” said museum guide Olga Topchishvili, who has been showing visitors around the museum for the last thirty years. “But, you know, why should we mention any of that? I don’t want to hear fairy tales about Stalin.”

“Poles always ask me ‘Why is there nothing here on Katyn?’” she sighed, referring to the massacre of over 20,000 Polish officers and intellectuals by Stalin's security police in 1940.

Instead, the museum features a range of exhibits telling the story of Stalin’s colorful life, from his youth as a would-be-priest and later daring bank robber to his days as a Marxist revolutionary and three-decade rule over the Soviet Union.

One hall boasts the dictator’s death mask, while another is home to a selection of gifts sent to him, including an impressive tank-shaped radio and carpets embroidered with his portrait.

Outside the museum stands a statue of Stalin that – until 2010 – stood in the city center. The authorities were so wary of local anger over the decision to remove it that workers took the monument down in the dead of night.

“I’m proud of Stalin,” said Tamar, a sales assistant in the museum’s first-floor gift shop as she showed off the store’s selection of t-shirts, mugs, wine and lighters all bearing the dictator’s likeness. “He was born in our small town, but grew up to be a powerful man.”

But the clock is ticking down for the present-day incarnation of the State Stalin Museum.

Tucked away in a corner of the first floor of the museum are three shiny banners – in Georgian, English and Russian – that spell out a message likely to prove unwelcome to many in Gori.

"This museum is a typical example of Soviet propaganda and falsification of history,” read the banners. “Throughout various stages of Soviet history, the expositions were modified or refocused, but the objective of this museum stayed unchanged – to legitimize the bloodiest regime in history.”

“This museum will be transformed into the Museum of Stalinism, which will tell the story of the most important milestones in Stalinism thoroughly and impartially,” the banner vowed.

A somewhat reluctant Topchishvili pointed out the tiny room that is the first stage of the new Museum of Stalinism. She made no effort to disguise her displeasure as she pointed out clothes that once belonged to “alleged victims of repression.”

“Look,” she said, pointing to the banner. “It says between 15 and 40 million people were killed by the Soviet regime. How can they lose 25 million people? I’m a historian and I want facts, not these…fairy tales.”

Outside, a young student, Tatia Kopadze, 17, laughed when asked what she thought of Stalin.

“He was a hundred times better than our current president!” she smiled, on the eve of parliamentary elections that would see a crushing defeat for the party of President Mikheil Saakashvili, the pro-West hero of the 2003 Rose Revolution.

Saakashvili’s enthusiasm for Western institutions and politicians sits uneasily alongside the unabashed passion for Stalin in Gori. Indeed, Georgia is the only place in the world with streets named after both Stalin and former US President George W. Bush, the latter having sparked protests after its 2005 renaming.

“It’s very simple,” explained a Tbilisi journalist later that evening, when asked about the respect still shown for Stalin in Gori. “People in Spain are proud that their football team is champion of Europe, right? Well, people in Gori are proud that a local boy grew up to be champion of the world – the Soviet part at least.”