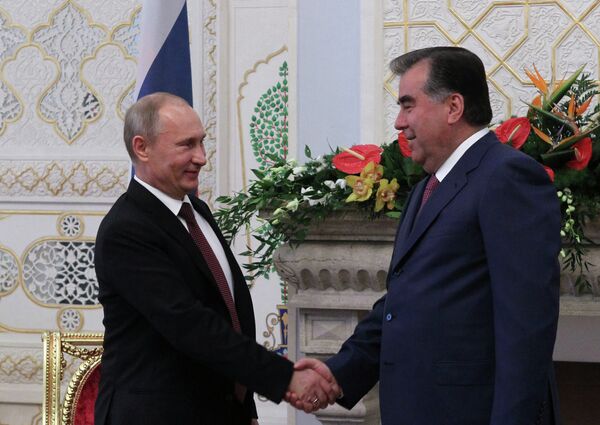 © RIA Novosti . Mikhail Klementiev
/
Go to the mediabank
Subscribe
International
India
Africa
Russia won a 30-year deal on a military base in Tajikistan, but the price includes risk of placing Russian servicemen under fire if violence flares up in volatile Central Asia.

Russia won a 30-year deal on a military base in Tajikistan, but the price includes risk of placing Russian servicemen under fire if violence flares up in volatile Central Asia.

Moscow and Dushanbe clinched an agreement on Friday on a Russian military base in Tajikistan, which will remain in the country until at least 2042, a Russian presidential aide said.

The agreement, which followed months of haggling, is a success for Russian diplomacy, Russian and Western analysts said.

But it also means that Russia agrees to use military force to maintain peace in Central Asia, a region that is set to grow much more turbulent after the US forces pull out of Afghanistan in 2014, pundits said.

The deal was sealed during a meeting of Russian President Vladimir Putin with his Tajik counterpart Emomali Rahmon in the Tajik capital of Dushanbe, Putin’s aide, Yury Ushakov, said.

The current agreement on the base was set to expire in 2014, but was prolonged for 30 years, with the option of repeatedly extending it for five years after that date, Ushakov said. Russia sought to extend the deal for 49 years, while Tajikistan wanted to limit it to 10 years.

Media reports said earlier Tajikistan wanted $250 million a year to host the base, which hosts 7,000 troops across three locations. But Ushakov said on Friday that Russia would get the base “almost free of charge.” He gave no further details.

The Taliban Are Coming

Destabilization is imminent in Central Asia after US troops’ pullout from Afghanistan, analysts said.

The Taliban is hoping to return to power in Afghanistan or at least increase their influence, which would likely resonate throughout the region, said Alexander Knyazev from the Institute of Oriental Studies at the Russian Academy of Sciences.

Tensions between Tajikistan and Uzbekistan are also riding high due to the conflict over the Rogun Dam, which is in the works in Tajikistan, he said.

The situation inside Tajikistan is shaky as well, as evidenced by a recent spate of violence in the Gorno-Badakhshan province, where the government failed to suppress a rebellion by a local warlord in July and had to negotiate, said Vladimir Bartenev, head of the Center for Security and Development Studies at the Moscow State University.

The Russian base is crucial in this regard, with 7,000 highly qualified troops keeping hotheads all across the region from rash armed action, Knyazev said.

But they may be in for some serious testing by the Taliban, said Paul Quinn-Judge, an expert on Central Asia at the International Crisis Group, a Brussels-based watchdog.

The extent of havoc that the Islamists will be able to wreak across Central Asia after 2014 is hard to evaluate in advance, Quinn-Judge conceded.

But it is at least “conceivable” that the Russian troops in Tajikistan would even be required to conduct operations in northern Afghanistan, returning to the country for the first time after the lost Afghan war of 1979-1989, he said.

“Russia would be expected to protect Tajikistan now…and the risk would grow after 2014,” Quinn-Judge said.

The US deadline of 2014 made it imperative that the Russia prolong the base deal, set to expire the same year, experts said.

The cordial accord on Friday, however, was preceded by a year of tense negotiations, with the deadline for the deal’s signing repeatedly pushed back. Just last week, the commander of the Russian Ground Forces, Vladimir Chirkin, predicted that the agreement prolonging Russian troops’ stay in Tajikistan would not be sealed until summer 2013.

“Tajik authorities acted as if they were at a bazaar,” said Knyazev of the Institute of Oriental Studies.

The deal was accompanied by a set of other agreements, including Russia’s pledge to extend residency and work permits for Tajik nationals. Money sent home from Russia by the 1.1 million Tajik workers in the country amounted to $3 billion in 2011, making up around half of the impoverished republic’s GDP, Putin’s aide Ushakov said.

Russia would also step up cooperation with Tajikistan on combatting illegal drugs, giving Dushanbe $5 million to the purpose.

Moscow is also “considering” involvement in Tajikistan’s plans to build a set of hydro power plants on the country’s interior rivers, Putin said after talks with Rahmon. He did not elaborate.

Tajikistan is building the 335-meter-high Rogun Dam on the Vakhsh River. The project was lambasted by neighboring Uzbekistan, which fears the dam would decrease its supply of drinking water, a precious commodity in arid Central Asia.

The package deal on migration, anti-drug campaigning and energy indicated that Russian diplomacy finally learned to use economic incentives to accomplish its goals, said Bartenev of the Center for Security and Development Studies.

What Would the Neighbors Think

Moscow clinched last month a similar deal with Kyrgyzstan, which will host a Russian military base though at least 2032, writing off $500 million of Kyrgyz debts in exchange. The Central Asian republic also houses a US military base, but it is set to be closed by 2014.

Speeding the Tajik deal was important for Putin, who is very conscious of Russia’s image in the West and sees Central Asia, a zone of Russia’s alleged “privileged interests,” as a means of boosting Moscow’s international prestige, Quinn-Judge said.

But at the same time, the deal with Dushanbe is bound to irk Uzbekistan, an aspiring regional power which has been leaning toward the United States in recent months, Knyazev said.

A delegation of 17 America senior military officials is touring Uzbekistan this week, adding weight to reports that the United States plan to set up a transit base in the country to aid the pullout of its forces from Afghanistan.

“You can’t exchange a queen for two pawns,” Knyazev said, referring to Russia’s deals with Kyrgyzstan and Tajikistan at the expense of Uzbekistan. “But I hope Putin is just sounding off on the situation before beginning dialogue with [Uzbekistan's capital] Tashkent.”