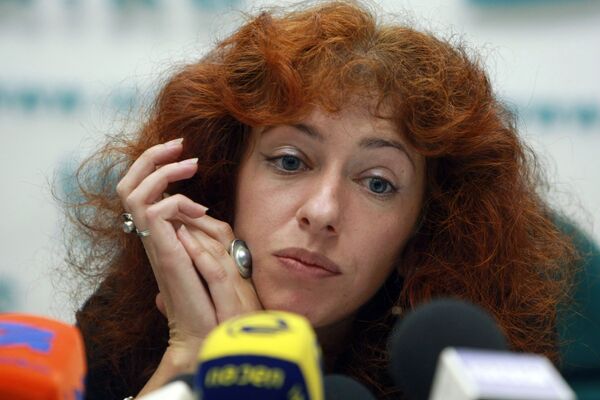 A prominent human rights worker in Moscow has reported receiving anonymous threats on her cell phone.

Tanya Lokshina, a senior Russia researcher for Human Rights Watch, said she received direct and severe threats via text messages mentioning specific details of her life, including her pregnancy.

She also said the contents of the messages pointed to the sender's constant surveillance.

"It was obvious that they were sent not from ordinary people who are able to listen to my phone, but ones are specifically listening in," she told reporters Thursday.

Lokshina added that while the messages had not been the first threats made against her, their "level of cynicism" was "unprecedented."

Lokshina, widely known as one of Russia's leading human rights experts, said she received between two and five threats per day from September 28-30. Most of the nine messages referred to Lokshina’s pregnancy and her child’s “uneasy ‘birth.’”

“These threats demonstrate that the sender clearly was following Tanya’s every move – they knew where she lived, what she was doing,” said HRW director Kenneth Roth in a video address posted to the watchdog's website Thursday.

Roth’s statement implies the threats against Lokshina are part of a Kremlin crackdown. He noted that the human rights situation in Russia is “as bad as we’ve seen in 20 years.”

Recent weeks and months have seen the imposition of steep fines for public protests, the imprisonment of punk group Pussy Riot for a performance in Moscow’s Cathedral of Christ the Savior, and a law labeling NGOs receiving funds from abroad “foreign agents.”

“I think we’re all aware of the severe crackdown that is taking place today in Russia against civil society and human rights defenders,” he said.

Roth also called for a thorough investigation into the matter. He added that the threats “will have the opposite effect, and HRW will “redouble [their] efforts” against the Kremlin’s alleged crackdown.

Russia's Interior Ministry said Thursday it will investigate the incident, based on a request from human rights commissioner Vladimir Lukin, according to the ministry's press service.