Own Goal Misery for Zenit in Milan Defeat 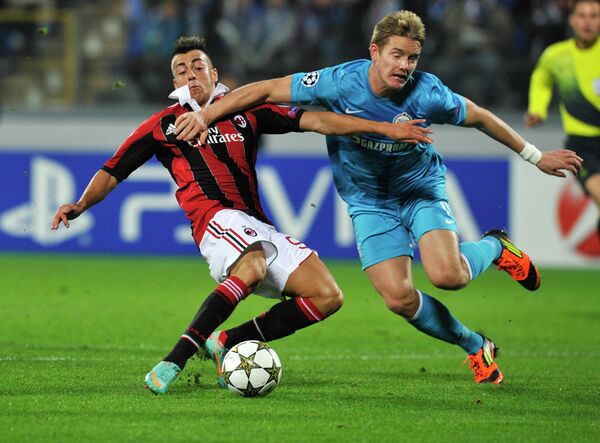 © RIA Novosti . Alexei Kudenko
/
Go to the photo bank
Subscribe
A late own goal and an imperious goalkeeping display by Christian Abbiatti gave AC Milan a 3-2 win at Zenit St. Petersburg in the Champions League on Wednesday and putting Zenit on the brink of an early exit.

A late own goal and an imperious goalkeeping display by Christian Abbiatti gave AC Milan a 3-2 win at Zenit St. Petersburg in the Champions League on Wednesday and putting Zenit on the brink of an early exit.

Defender Tomas Hubocan decided the match when he put the ball into his own net on 75 minutes, ending a 16-game unbeaten home run in European competition for Zenit.

Milan top the group with four points ahead of Anderlecht’s game with Malaga later Wednesday, while Zenit’s second defeat in two games leaves the Russians struggling to match last year’s achievement of reaching the knockout stages for the first time.

Urby Emanuelson gave Milan the lead on 12 minutes when his free-kick took a heavy deflection off Roman Shirokov in the Zenit wall and looped into the Zenit net, deceiving goalkeeper Vyacheslav Malafeev.

The second goal four minutes later was a display of individual skill from Stephen El Shaarawy, who dribbled through the Zenit defense before slicing the ball past Malafeev.

Zenit sparked into life and began bombarding Christian Abbiatti’s goal. The breakthrough came on the stroke of half-time when Hulk picked up Roman Shirokov’s pass and fired a stinging shot inside the near post.

The goal was Hulk’s first since signing for Zenit in a €40 million transfer from Porto last month, while Zenit have won only one game from six with the Brazil striker in the side.

Hulk turned provider for Shirokov for Zenit’s second, swinging in a corner that the midfielder headed past Abbiatti four minutes after the break.

Milan took back the lead against the run of play when defender Tomas Hubocan bundled Riccardo Montolivo’s cross into his own net while absorbed in a battle with Gianpaolo Pazzini.

Zenit had several chances to score more and could have won the game.

This was especially true of the final 15 minutes of the first half, when Abbiatti preserved Milan’s lead by stopping promising efforts from Hulk and Vladimir Bystrov as well as wild clearances from his own teammates.

Hulk had a strong penalty appeal turned down early in the second half after he went down in the Milan box under a challenge from Ignazio Abate.

Fellow €40 million signing Axel Witsel impressed after returning from an injury sustained in his Zenit debut last month, starting many of the hosts’ attacking moves and sending a shot just wide of the post on 56 minutes.

After Hubocan’s own goal, right-back Alexander Anyukov almost gave Zenit a late equalizer with a powerful long shot, but Abbiatti pulled off an acrobatic save.