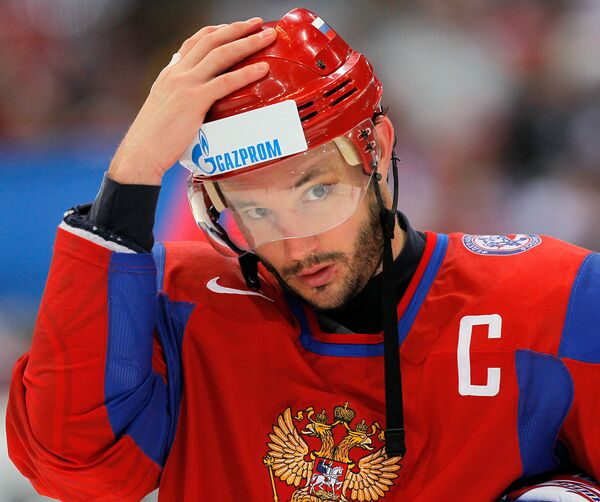 Three-time All-Star Ilya Kovalchuk is just one of the dozens of NHL players who have moved abroad to play during the lockout. Now at KHL team SKA St. Petersburg, the New Jersey Devils wing delivers a stark warning to NHL team owners about mooted pay cuts for players in an interview with R-Sport.

Three-time All-Star Ilya Kovalchuk is just one of the dozens of NHL players who have moved abroad to play during the lockout. Now at KHL team SKA St. Petersburg, the New Jersey Devils wing delivers a stark warning to NHL team owners about mooted pay cuts for players in an interview with R-Sport.

How long do you think the NHL lockout will last?

“For some reason, they’re still refusing to talk about the serious problems, but instead talk about some borderline issues. The main thing is that all the guys have now shown the team owners that they can go and play somewhere, do their favorite thing and not just stay home. If you stay home then you can start getting depressed and clearly the team owners are hoping for that, but I think that this time things will be a little different.”

How would you feel about playing a full season in the KHL?

“I really don’t care, the main thing for me is hockey. I really like it here and if there isn’t a season there, then I’d be delighted to play it out here and try to do it as well as possible.”

Why haven’t stars like Sidney Crosby or Steve Stamkos come to the KHL?

“Maybe they’re a bit worried and hesitant about coming to Russia, but it’s a personal thing. If the lockout lasts a year then I think we’ll see a few more people in the KHL.”

Vyacheslav Fetisov’s said each lockout increases the risk of the NHL losing its superstars to other leagues. Do you agree?

“If there is any sort of reduction in players’ play, then [NHL owners] risk losing them now. I can’t say that we’re all some sort of superstars, I don’t personally call myself that. I’ve talked with a lot of the guys. We will look very seriously at these options.”

How do you feel about the KHL so far?

“Some very good impressions. The people cheer, get emotional, go to the hockey and that’s very important. Maybe the arrival of guys from the NHL has attracted some attention, but I was following KHL games last year too. Especially in St. Pete, a lot of people go to the hockey. There’s a great atmosphere.”

What are the main differences between the NHL and the KHL?

“It’s hard to say. The NHL’s been around for more than a hundred years, but the KHL’s existed for just five. In terms of infrastructure there’s something to strive for. If the arenas in all the cities were as good as in St. Pete, then we could talk about something.”

And the quality of the hockey?

“Actually, it’s not for everyone. Some people like seeing hockey on large rinks, some on small rinks. Here we have some specific Russian aspects of hockey, Soviet hockey’s promoted, a lot of passing play. There are a lot of very talented young guys in the league, who only a few people know. Interest in hockey in the country [Russia] has grown, the press gives it a lot of attention, and that’s right. It’s vital that these young players get mentioned more often and the spectators go to the stadium to watch them.”

You’ve said before that moaning about the different rink sizes in the NHL and KHL is an excuse for weak people. Where are you most comfortable?

“That is an excuse for weak people, 100 percent. I don’t care what rinks I’m playing on. I feel comfortable on any rink, especially when I’m playing with very good teammates.”

How have you adapted to life at SKA?

“Very well. I’ve got to know everyone and there’s even some mutual interests with the guys. There’s a very good atmosphere in the team.”

You were named captain when SKA signed you. But in the lockout, you could leave at any moment…

“It was the team management’s decision, so there wasn’t even any discussion. I took it for granted. What can you do if the team president wants you to be the captain? For me, the main thing was that my teammates reacted to this with understanding.”

How have the team and ex-captain Dimitry Kalinin taken it?

“It’s all ok. I talked about it with Dima Kalinin and everything turned out even better than I’d expected.”

What about coach Milos Riha? Has he changed from when you played for him at Khimik in 2005?

“No, he hasn’t changed at all. I remember him being just as emotional. He’s a good, very impulsive coach who can get the guys fired up. The assistants working with him used to play and have vast experience so we are on the right track.”

“Yes, of course. And why not? We’ll definitely go, especially because one of the stages will be in Moscow, so I’d be delighted to play.”

Does Russia have to win Olympic gold at home in Sochi in 2014?

“How do you mean ‘have to’? Of course we’ll try to do everything we can but hockey’s a game first of all, so anything can happen.”