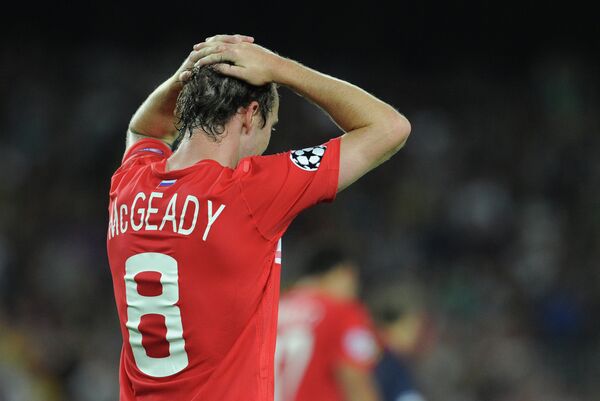 Aiden McGeady said Tuesday he was "disappointed, very disappointed" to lose to his boyhood club Celtic.

The team he left in 2010 beat his current club Spartak Moscow 3-2 after coming back from 2-1 down with 20 minutes remaining.

Celtic grabbed their first win in 21 Champions League away fixtures with victory in Moscow, leaving McGeady cursing his luck.

"It's kind of strange, obviously," he said.

For the second time in two group stage games, Spartak threw away the lead in the closing stages, and the Russians' generosity means the next game away to Benfica is must-win, McGeady said.

"We've got zero points now after two games, so we have to win," he said, adding Spartak would have to approach the tie "differently from how we did tonight."

McGeady is a natural winger but spent much of the Celtic game in a central role amid a thicket of Celtic players and was reticent when asked about coach Unai Emery's decision to play him there.

"This is the way the manager wants to play, so ask him," adding that the role can be "comfortable when there's space, but tonight Celtic played very, very deep and it was difficult to get space."

McGeady switched to Spartak a reported fee of 10 million pounds, allowing Celtic to embark on a spending spree that included several players in Tuesday's side.