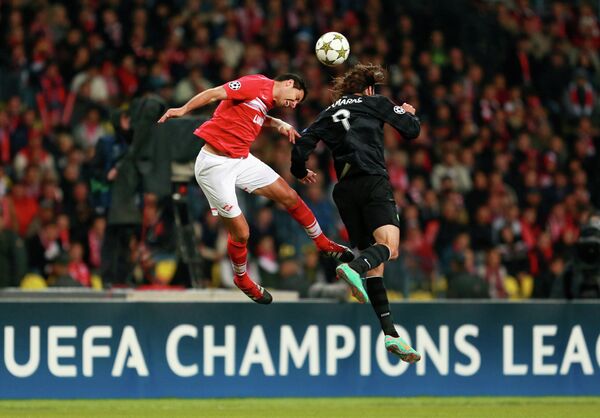 © RIA Novosti . Anton Denisov
/
Go to the photo bank
Subscribe
Georgios Samaras headed a dramatic last-second winner to give Celtic a 3-2 win over 10-man Spartak Moscow in the Champions League on Tuesday.

Georgios Samaras headed a dramatic last-second winner to give Celtic a 3-2 win over 10-man Spartak Moscow in the Champions League on Tuesday.

The pulsating match looked to be heading for a draw after Spartak defender Dmitry Kombarov scored an own goal on 71 minutes, turning James Forrest's low drive into his own net.

Celtic had taken a surprise lead on their first attack of the game through Gary Hooper on 12 minutes. The striker steered home Mikael Lustig's low cross for his seventh goal in four games.

Spartak leveled it on 41 minutes as Emmanuel Emenike tapped in after a knockdown from Brazilian strike partner Ari.

“I can’t speak highly enough of the players, they were magnificent, and they played magnificent football at a very tough venue against an excellent side,” said Celtic coach Neil Lennon.

“We showed great character and fortitude to come back after going a goal down after half time and I thought we thoroughly deserved the win.”

Juan Manuel Insaurralde was sent off for Spartak for a last-man tackle on Gary Hooper just after the hour mark.

It is Spartak's second-consecutive 3-2 defeat after last month's loss to Barcelona at the Camp Nou.

"What's going on with our defending? We need to get to the bottom of it," said beleaguered Spartak coach Unai Emery. "We need to ask questions not only of our defenders, but of the defensive play of the whole team."

"If the team not only fails to take its chances, but also loses the ball in the center of the pitch and allows counterattacks, then this speaks to a more serious problem that we need to get to grips with," Emery said.

Spartak's Glasgow-born winger Aiden McGeady faced his boyhood club, putting in a subdued performance that saw him outshone by Spartak's other winger, Ari.

Earlier, Hooper thought he'd scored a second on 24 minutes when he ghosted in at the far post to head in a Samaras cross, but it was correctly disallowed for offside.

Emenike had missed two good early headed chances, getting too little on a Kombarov cross a few yards from goal before heading high soon after.

Celtic goalkeeper Fraser Forster made a fine save on 39 minutes to punch away a wickedly curving Nicolas Pareja free-kick.

Spartak Moscow goalkeeper Pesyakov pulled off two saves in five seconds to deny Celtic a goal from the free-kick that resulted from the sending-off.

Hooper appealed for a penalty on 83 minutes when Insaurralde's replacement Sergei Bryzgalov appeared to haul him down by the arm, but the referee was unmoved.

In stoppage time, Emenike almost gave Spartak a draw, but could not apply the finish on a breakaway attempt.

Spartak fans poured out of the Luzhniki stadium after Samaras scored and those who remained booed their team at the final whistle.