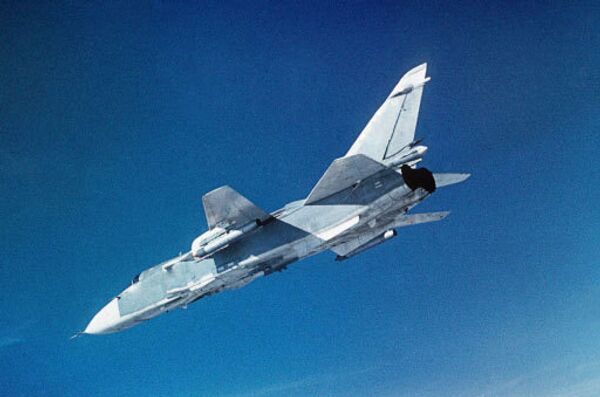 © RIA Novosti . Skrynnikov
Subscribe
The Russian military will appeal a court ruling that deemed combat jet flights over the city of Chelyabinsk illegal, a spokesman for the Central Military District said on Monday.

The Russian military will appeal a court ruling that deemed combat jet flights over the city of Chelyabinsk illegal, a spokesman for the Central Military District said on Monday.

A regional court earlier on Monday ordered a temporary suspension of flights by Sukhoi Su-24 Fencer strike aircraft from a nearby base, in response to complaints about jet noise when they overfly the city.

“The court ruling will be questioned on several grounds,” Col. Yaroslav Roschupkin said. “We have 30 days to appeal and our lawyers have already started drafting an appeal.”

According to Roschupkin, the Shagol air base near the city of Chelyabinsk in the Urals, is a vital Air Force facility, and the location of its runways and its operation is determined by a presidential decree.

“The military training plans were drafted with a long-term perspective in mind and their violation would harm the defense of the Russian airspace while undermining the operational capability of the military units deployed in the strategically important Central Asian theater,” the official said.

Roschupkin doubts that a regional court has the authority to make decisions that could negatively affect the combat readiness of the Russian Armed Forces.

He added that the district commanders had taken several steps to reduce the combat jets’ noise impact on the population, including the construction of noise-reduction barriers around the runways at the air base.

Chelyabinsk residents have complained to the city authorities about the noise ever since the Su-24s were moved to the nearby Shagol air base in November 2010. They claim the air force is violating their right to a comfortable living environment.

They complain that the roar produced by the jets flying over the city at low altitudes every 10-15 minutes frightens children and triggers car alarms. They also say training flights are sometimes even carried out at night.

Testing by the Center for Hygiene and Epidemiology in Chelyabinsk region has confirmed the aircraft noise exceeds acceptable levels. However, military officials argue that the aircraft noise measurements did not take into account a number of specific factors.

Shagol's air base commander said earlier the flights pose no threat to the city residents, and said it would be impossible to move the base from its current location any time soon.

Several Chelyabinsk residents filed a lawsuit in a civil court after the Defense Ministry failed to address the issue.

The Su-24 is a strike aircraft designed to deliver missile and bomb attacks at low altitudes.

The jet has a poor safety record, with 16 major accidents involving the type since 2000.