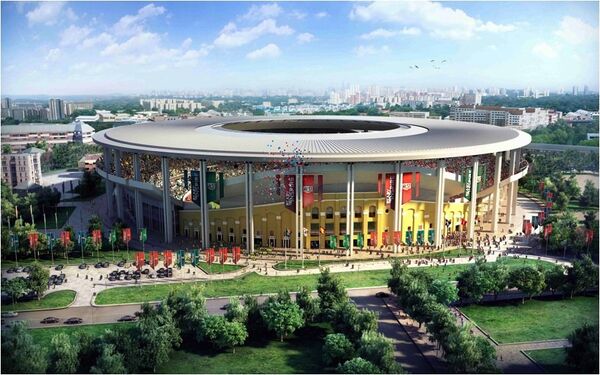 Russia announced the 11 cities to host the 2018 World Cup on Saturday, with Moscow and St. Petersburg joined by cities including Olympic host Sochi and also Volgograd, formerly known as Stalingrad.

Russia announced the 11 cities to host the 2018 World Cup on Saturday, with Moscow and St. Petersburg joined by cities including Olympic host Sochi and also Volgograd, formerly known as Stalingrad.

All the World Cup venues are in Russia’s European territory, but the distances involved are still vast.

The final 11 range from Kaliningrad, located near Poland in Russia’s western exclave, to Yekaterinburg, almost 3,000 kilometers due east in the Ural Mountains.

The others announced in a marathon TV presentation with Russia coach Fabio Capello and ex-Brazil star Roberto Carlos in attendance are the central cities of Kazan, Nizhny Novogorod, Samara and Saransk, as well as Rostov-on-Don in the south.

Russia is ahead of schedule in planning the tournament, FIFA president Sepp Blatter said in televised comments.

“We are far away from our program because you are much more advanced,” Blatter said.

“More than anything, it’s a very good way to get young people involved in sport,” he said in televised comments, adding: “It’s a good stimulator to boost the economy.”

Beating England and the other bidders had been just a formality, Putin said.

“We never thought we wouldn’t win when we submitted the bid.”

The two cities to be dropped from the list of 13 submitted with Russia’s bid were Krasnodar in the south, the only city outside Moscow with two top-flight football clubs, and Yaroslavl near Moscow, where a 45,000-seater stadium was planned.

Sports Minister Vitaly Mutko had earlier excluded Krasnodar, where a 50,000-seater arena would have been built, from a list of five cities he deemed at risk of not making the cut.

Putin said that the government would subsidies transport to matches for people in the cities cut from the final list.

Of three proposed stadiums for Moscow, the vast Luzhniki was already assured of hosting the final, but only one of two other proposed arenas could make the cut.

The 45,000-capacity stadium being built for Dynamo Moscow fell by the wayside as rivals Spartak Moscow's new 43,000-seater home was preferred alongside Luzhniki.

Both Spartak and Dynamo’s grounds are already under construction, but FIFA felt three stadiums in Moscow would be too many for Europe’s largest city.

The decision, made by FIFA's executive committee, followed a tour of all 13 candidate cities by a FIFA delegation, during which the officials’ impressions were kept strictly under wraps.

The homes of more of Russia’s biggest clubs are set to become World Cup venues, as Zenit St. Petersburg and Rubin Kazan all saw their planned new stadiums included on the list.

Sochi, where the Fisht Olympic Stadium is being built for the 2014 Winter Olympics, will also become a World Cup venue.

In ethnically diverse Russia, Kazan is the only venue in a largely Muslim region. The new venue will host football at the Universiade world student games next year.

The smallest city is Saransk, with a population of around 300,000 people, where work on a new stadium has already started.

Russia beat a bid from England and two joint bids, one from Portugal and Spain, the other from Belgium and the Netherlands, to host the 2018 World Cup.