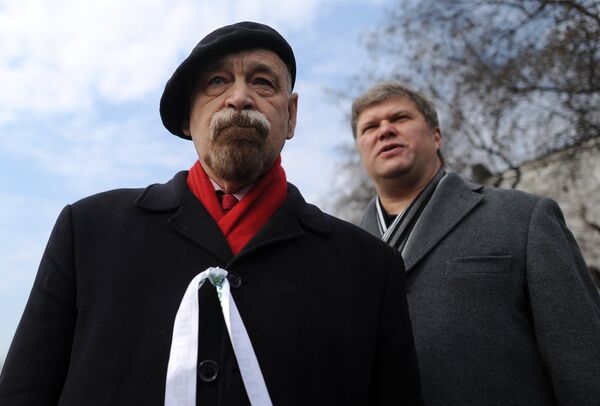 Several prominent Russian activists slammed what they call the Kremlin’s steady clampdown on dissent through a series of controversial laws that stifle civil society, from raising fines for unsanctioned protests to forcing NGOs receiving foreign funding to register as “foreign agents."

Several prominent Russian activists slammed what they call the Kremlin’s steady clampdown on dissent through a series of controversial laws that stifle civil society, from raising fines for unsanctioned protests to forcing NGOs receiving foreign funding to register as “foreign agents."

“These laws are a departure from the Constitution, from Russia’s international obligations, and even more so, a departure from all the fundamental human rights that have appeared in the civilized world throughout the last century,” Moscow Helsinki Group head Lyudmila Alexeyeva told reporters on Thursday.

Since Vladimir Putin’s reelection as president, the State Duma has given the green light to several laws that Russian civil society activists claim are intended to dampen dissent and provoke fear among citizens who have become increasingly active in recent months.

These laws range from a substantial hike in protest-related fines, which could reach up to $9,000 for an average protester, to a law that critics claim is intended to restrict the internet under the guise of protecting children from harmful content. The law requiring homegrown NGOs to register as “foreign agents” if they receive foreign funding and engage in political activity was a particularly controversial recent addition to the statute book.

Last week the authorities ordered the United States Agency for International Development (USAID) to shut down its operations in Russia by October 1. USAID provided substantial funding to 57 different Russian rights organizations, and the move cuts a crucial funding source for them.

Lillia Shabanova, head of the independent vote monitor Golos, which receives American aid from other sources, argues these changes are clearly intended to keep civil society in check ahead of regional elections in mid-October.

“This package of laws, in my opinion, is designed to make an already managed democracy absolutely managed,” she said.

But most unsettling, these activists agree, is the latest amendment broadening the definition of high treason so it applies to any Russian citizen involved with a foreign organization. The amendment, proposed by the FSB, has just passed its first reading and is expected to sail through parliament.

Lev Ponomaryov, head of the For Human Rights organization, which also receives American funding, blasted the law’s ambiguous wording, arguing that it could be used at will against a variety of Kremlin opponents working in human rights.

Vitaly Borschov, of the Moscow Helsinki Group, compared the trend to Hitler’s early crackdown on Jews. “This is a law of yellow stars,” he said. “The similarity between Nazism and their ideology, in terms of how they are dealing with us, doesn’t even bother them,” he added.

Borschov, a veteran rights activist, added that the Kremlin's measures are harsher than those employed by the Soviet authorities to stifle dissent, because “even they never labeled me a ‘foreign agent.’”

Despite Kremlin pressure, most of Russia’s leading activists vowed not to register as foreign agents and to continue seeking Western funding.

Yet in a sign of the growing pressure against her colleagues, Alexeyeva acknowledged that – despite their strength – not all would be strong enough to resist.

“We need to help everyone, and understand that those who give in will have done so because they were broken,” she said. “The most important value we have embraced in all these years is…to help one another.”

Shabanova stressed that an information campaign to inform the general public of these changes is needed, adding that “from our perspective, the steps that the authorities are taking are pushing us toward unity.”