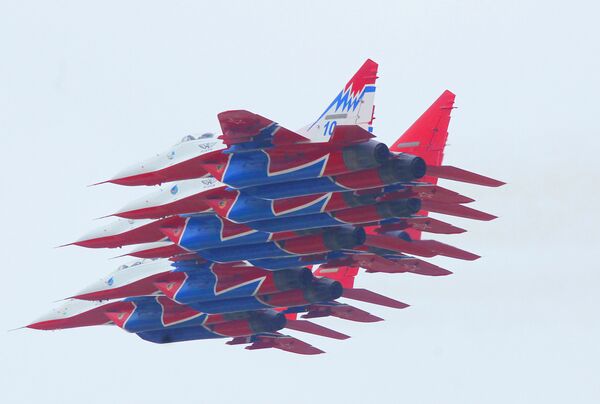 Two reserve pilots from the Russian aerobatic team The Swifts stepped down following a recent scandal that cost their commander's job, a source in the group told RIA Novosti on Thursday.

Two reserve pilots from the Russian aerobatic team The Swifts stepped down following a recent scandal that cost their commander's job, a source in the group told RIA Novosti on Thursday.

One of the pilots resigned in protest of the commander’s discharge, which followed extortion allegations, the source said, while the other quit because the pilots were recently given odd jobs such as guard duty.

No official comment on the matter was available as of Thursday afternoon.

The Swifts were hit by a scandal last month after police accused Lt. Colonel Valery Morozov, the team's leader, of extorting a combined 35,000 rubles ($1,100) from seven of his subordinates looking to skip duty, as well as a similar sum from a businessman peddling authorized Swifts merchandize.

Morozov, who denied the allegations, was fired earlier in September. The investigation against him is still in progress.

The Swifts, along with another famous aerobatics team, The Russian Knights, were reassigned to a training center in Lipetsk region earlier this year.

The center, however, has its own aerobatics team, Russia’s Falcons, and is not interested in helping its rivals, unidentified members of The Swifts claimed in July in an interview to Moskovsky Komsomolets.

Members of the Swifts and the Russian Knights are being forced by Air Force officials to move from real fighter jets to Yak-130 jet training aircraft, the pilots said.

Moreover, two-thirds of the groups’ primary air base in Kubinka, in the Moscow Region, is currently controlled by billionaire Suleiman Kerimov, and they share it with the military. The pilots said in the interview that some of the fighter jets had to be moved out of their hangars and stationed outdoors because the military does not own the premises anymore.

The Russian Knights had to miss the prestigious airshow in the British Farnborough in July due to a lack of necessary permits from the Russian government, a scandal that many military experts called a sign of a crisis in the Russian Air Force.