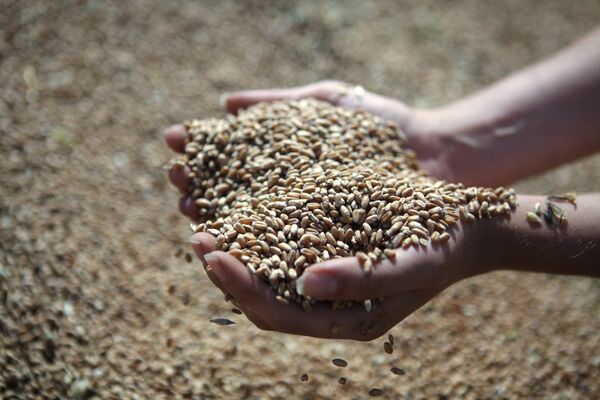 © RIA Novosti . Mikhail Mokrushin
/
Go to the photo bank
Subscribe
The U.S. biotechnology company at the heart of a study purportedly linking genetically engineered corn to tumors in lab rats says the study is not credible and Russia’s decision to suspend imports of the corn will have little impact on its sales.

The U.S. biotechnology company at the heart of a study purportedly linking genetically engineered corn to tumors in lab rats says the study is not credible and Russia’s decision to suspend imports of the corn will have little impact on its sales.

“We do not believe the recent French research findings present information that justifies any change in the safety determination for NK603,” said Tom Helscher, director of corporate affairs for biotech giant Monsanto.

“Russia is a net exporter of grain so the actual impact of their temporary suspension, if any, is likely to be small,” he added.

Russia’s consumer protection agency Rospotrebnadzor announced Tuesday a suspension on importation and use of the modified corn NK603, sold under the Monsanto brand name Roundup Ready, after researchers at the University of Caen published the results of a two-year study in the Food and Chemical Toxicology journal.

The study found lab rats that were fed the NK603 corn developed large, bulging tumors and serious diseases including liver and kidney ailments at a much higher rate than a control group of rats that were fed regular corn. NK603 is engineered to withstand a weed killer also manufactured by Monsanto.

Many scientists have questioned the methods and findings of the study, according to the science journal Nature, and some scientists said the particular strain of rats included in the study have a tendency to develop tumors.

French Prime Minister Jean-Marc Ayrault has said if the findings of the study are confirmed, his government will push the European Union to ban imports.