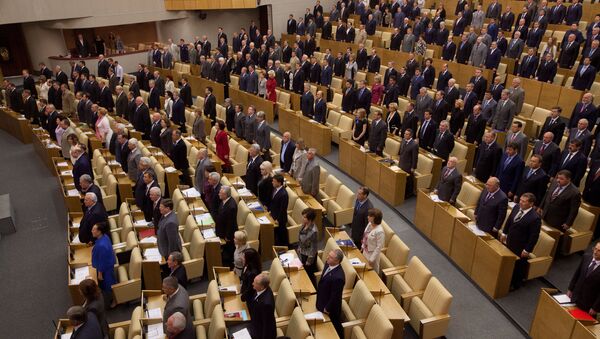 Russia's parliament is considering amendments to the country's criminal code, under which causing religious offense will be a crime punishable by measures ranging from a one-off fine to five years behind bars.

Russia's parliament is considering amendments to the country's criminal code, under which causing religious offense will be a crime punishable by measures ranging from a one-off fine to five years behind bars.

The initiative has so far found broad cross-party support in parliament, Yaroslav Nilov from the Liberal Democrat Party of Russia (LDPR) told journalists on Wednesday.

"The LDPR worked with all the other parliamentary parties and a member of the Federation Council to prepare the draft law, and now the draft law on tightening responsibility for causing religious offense has been submitted" he said.

Sergei Obukhov of Russia’s Communist Party, told RIA Novosti his party supports the draft law and said he hopes that it will come onto the statute book this session.

“The state has a duty to protect the rights of its citizens to their religious views. Antireligious campaigns risk destabilizing society, and in the interests of public order, peace, and security there is a real need to toughen punishment for causing religious offense” Obukhov said.

The Chair of the Duma Committee on Security and Anticorruption Measures, Irina Yarovaya, also backed the draft law, claiming offending religious sensibilities presents a very real danger to society as a whole, not just to the individual offended, because this "creates an atmosphere of conflict and mistrust."

"Believers not only value what they themselves hold holy, but also the confidence that they have in the state's protection," she added.

But the proposed changes also have their critics. Dmitry Gudkov, who represents A Just Russia in the Duma, commented on the draft law, tweeting "And Lenin on Red Square - doesn't that offend believers?" also asking whether those responsible for keeping him there would be sentenced to five years in jail under the new law.

The draft law follows the controversial sentencing to two years in prison of three members of punk group Pussy Riot, who were accused of offending the religious feelings of Orthodox believers by staging a "punk prayer" in a Moscow cathedral in February.

The trial sparked a division in Russian society between the Orthodox Church and the devout, and those who criticize what they claim is an increasingly close and unhealthy relationship between the Church and the Russian poltical establishment.