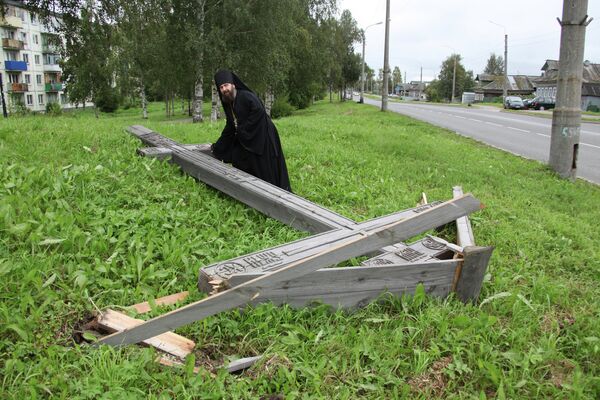 Over 80 percent of Russians support a draft legislation that would introduce harsher penalties for blasphemy and desecrating religious sites, a survey by the state-run pollster VTsIOM said.

Lawmakers from the parliament’s lower house, the State Duma, will debate starting next week amendments to the country’s Criminal Code. The amendments envisage a prison term of up to three years or a penalty between 100,000 and 200,000 rubles ($3,200-6,400) for desecration of religious sites and intimidation of religious beliefs of people.

According to the survey, 82 percent of the polled favor the new draft law, while 12 percent spoke against it.

The initiative first emerged after a Moscow court handed down in late August a two-year sentence to three members of the all-female anti-Putin punk band Pussy Riot, in a case which divided Russian society and sparked a wave of protest actions in support of the group. The group members were jailed after a protest at Moscow’s largest cathedral over Orthodox Church support for Vladimir Putin ahead of the March presidential polls that him to the Kremlin for a third term.

The draft law also comes after four wooden crosses were chopped down in Russia’s regions last month. A senior Moscow priest, Dmitry Smirnov, said the cross attacks amounted to a declaration of war against the Church. Several Church figures have previously called for blasphemy to be made a crime. It is currently an administrative offense punishable by a fine of up to 1,000 rubles ($31).

The survey was conducted on September 7-8, among 1,600 respondents in 138 Russian cities and towns. The margin of error is below 3.4 percent.