Nobody Needs Tennis in Russia Any More - Tarpishchev 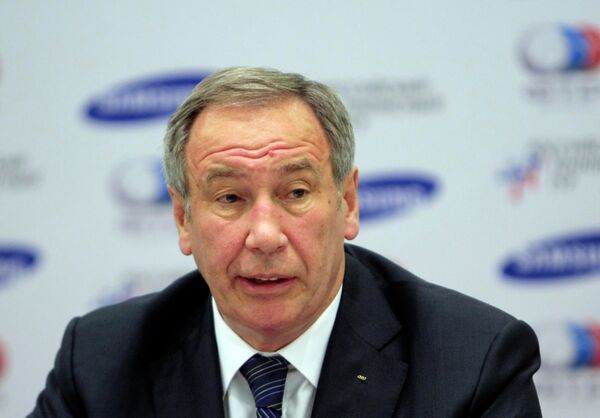 A week after the elimination of the Russian Davis Cup team from the elite World Group for the first time, the president of the Russian Tennis Federation Shamil Tarpishchev talks candidly about what's going in a sport Boris Yeltsin popularized nearly two decades ago.

A week after the elimination of the Russian Davis Cup team from the elite World Group for the first time, the president of the Russian Tennis Federation Shamil Tarpishchev talks candidly about what's going in a sport Boris Yeltsin popularized nearly two decades ago.

The Russian Davis Cup team was knocked out of the World Group. Our first opponent on the way back is Britain. What are your thoughts on that?

“The draw could have been better. But I look at this from a different angle. A new team is being shaped. We need to create symbiosis, so that young players learn from the experienced ones. This is what I wanted to accomplish and what we failed to do in the playoff tie against Brazil. There are a few good guys, Nikolay Davydenko, Mikhail Youzhny and Dmitry Tursunov are still playing. We need to make a mixed squad to shape up the young players. If Andy Murray plays for Britain, then they will be serious opponents. If not – then there are a lot of possibilities, everything will depend on the players that will be included in our team. Although we need to take into account that they will choose grass courts, that is not very good for us.”

It is obvious that men’s tennis has begun to decay in Russia. At what point did you realize things were going badly and what did you try to do to prevent the fall?

“Good question. If you take my publications of four years ago, then you could see that the problems I was talking then and I’m talking about now are the same. The thing is that tennis is a sport that contradicts sport training methods. Because there should be 18 peaks a year, that's without considering team competitions. These are 18 tournaments including Grand Slam and Miami. And if you add team competitions, then it turns out that tennis players should spend 34-36 weeks at the international tournaments. Now let anybody sit and calculate how much it costs players. Unlike other sports, for example, football and hockey where athletes are at full support, tennis players pay for themselves, because nobody finances them.”

“Our situation is sad and paradoxical. Over the last 10 years, we won eight youth and junior European championships. It proves that we are tapping the talented youth. People leave and others win these first places. If you take the last year, we had 577 winners of international tournaments. So the preparation problems arise when an athlete passes 14 years of age. Training up just one 16-year-old player costs $200,000 per year. And before he is 14, it is only $50,000 per year. That’s why all the losses happen at this period. Due to the lack of financing, 90 percent of tennis players should either quit or start wandering around the world trying to achieve something and find money. It is profoundly wrong. Now 13-15 of our former players represent other countries. Why? They [those countries] pour decent amounts of money into it, there is a contract system – athlete, coach and plus federation, where responsibility for preparation exists. But we can’t guarantee anything, so we can’t sign a contract.”

“We were the first tennis nation among 207 countries from 2001 to 2010. And now we kick about the topic: have we lost it or not? The coaching staff proved their efficiency. But where shall we go further? Nobody wants to consider tennis problems independently. That is startling. Take the budget of our federation and one of the U.S. and then consider the efficiency of this budget judging by results. I think that we would be insurmountable in first place, irrespective of all the issues we have to deal with. But how can we solve anything on a global scale, if we don’t have our own base? We pour out a lot of 14-year-old players into the different countries – and how are we supposed to control them?”

But we gave away a lot of young players to Kazakhstan – Mikhail Kukushkin, Andrey Golubev, Evgeni Korolev.

“It was their decision to leave. We let players go who should have quit playing because they didn’t have the money. If we hadn’t done it, you would have never heard their names. I tell you for sure.”

Would they be of service to you now?

“Yes. But they would have died here as players. Consider that they don’t exist. Our second team is dead. The third team is in Kazakhstan, and the second one including Mikhail Elgin and Valery Rudnev died. And they played better than those who left.”

You called up Stanislav Vovk, who is lower than 400 in the of ATP rankings, for the Brazil tie. Why?

“And who was I supposed to call?”

“Kuznetsov’s father begged me not to take him in the team. I talked to him. First of all, he said that his leg hurt and he wouldn’t last for five sets. Secondly, he is struggling to get to the top 100 players. He is in bad shape. It is absurd to put him on a five-set match. And there is no sense to fly to Brazil for a doubles match and after the return miss three weeks of the tour due to acclimatization. I did him a service. Donskoy wanted to play badly. But he has the same problem – breaking into the top 100. It’s clear that they are untested and wouldn’t have helped us beat Brazil. And if they get into the top 100, then they will play in the main draw at the Australia Open.”

Mikhail Youzhny declared that nobody had called him to play against Brazil.

“Mikhail shouldn’t palter with truth. I discussed this issue with his coach Boris Sobkin. The coach told me that it was meaningless to call him up because there were a lot of problems. Don’t forget, that during the latest team competitions there was not a single situation, including the Olympic Games, when players didn’t ask for compensation for “missing” the next three single tournaments. We don’t have this money. Maybe Youzhny wanted to play, but then why didn’t he discuss it with Sobkin? The first person I talk to is a coach.”

In general, under these circumstances, did we have a chance to defeat Brazil?

“Yes, we did. We easily took six cups [two Davis Cups and four Fed Cups] and I guarantee that we would have won nine if we had money in time. I could reel off a list of the competitions we could have won.”

Is the lack of money the main problem of the tennis federation?

“There are three generally accepted financing systems, but we don’t match any of them. I can go on and on about it. There are about a dozen sports in the world that are self-financed. But in our case it is impossible, the legal basis is not adapted for it. I can show you the figures, but who needs that? There was a supervisory board in the federation which allocated money. We have a program accepted on the conference, which contains a thorough description of what, when and how things should be done. But if the supervisory board wants to solve tennis problems by themselves without following the program, why do we need it then? Professionals know better what and when everything should be done.”

Then maybe it is worth choosing direct support of certain players?

“Sure, we can return to the Soviet Union and work that way. Sure, there will be a lot of noise, but what can we do, if four courts disappear in the center of Moscow. There will be no “Chaika,” a base is being built in Petrovsky park, three courts in Krylatskoe were closed. How could we build up a vertical of tennis player preparation with the system of rating tournaments? You can’t fly to so many places from Moscow – it is very expensive. If we had hundreds of tournaments that give points, like they have in America, then everything would be clear. But we don’t have such tournaments. Besides the Kremlin Cup and the St. Petersburg tournament, we hold only youth and junior competitions. We also organize Russian tennis tour. But it is a drop in the ocean. And now there is also players’ outflow. Nobody wants to coach, when you can earn more with throwing balls than work with a group. People want to live, not to coach.”

“Our scientific group is one of the best in the world. Our methods are high-profile, but they are just methods if you can’t apply them. Specific example: such quality as speed is developed best of all at the age from seven to nine. Take the regulatory framework for tennis training. It is stated that there should be 16 children in the group. What can you do with seven-year-olds and nine-year-olds if there are 16 of them in the group? It is ridiculous. But stamina doesn’t play in tennis alone. If you missed this period when speed is developed, then you missed at least 50 percent of tennis players who could have grown into good athletes. One problem after another. Despite all this, I stay optimistic.”

Our young players leave Russia to train in foreign academies and our coaches, one of the best in the world, jogtrot without work.

“Yes, but why? Because bases are commercialized. If we build federal and regional centers and pay coaches $10,000 per month, the same amount they get for throwing balls to businessmen, then everything’s going to be all right.”

What ways of getting out of the crisis do you see?

“I ask for tennis problems to be considered separately. I’m asking for three years already, but nobody participates in this. We discussed all this at the conference and experts discussed it in all the Russian regions. The next stage, if the situation remains the same, is to train certain players, do not develop tennis everywhere. To prepare five-six players, not like in women’s tennis where we had up to 20 representatives in the top 100. There was an idea about the athlete preparation system – to open a university under the auspices of the International Tennis Federation. We had complete agreement. But finances don’t allow us turn it into reality. Now we have agreed that such preparation will be organized through the Russian State University of Physical Training. There was an idea of building 12 academies from Moscow to Volga so that our young players studied and trained there. We have it on paper, but we need financial support for this. I’m a supporter of academies. If we had academies, we would use our knowledge and be at the highest, unattainable level. It’s a shame when you know which results you could achieve and how to do it, but nobody cares. My soul hurts from the fact that 90% of work is done in vain.”

Have you turned to the Ministry of Sport with these ideas?

“I’ve spoken to everybody, but nobody wants anything. We took silver and bronze at the Olympics and they don’t even feel proud for us. I received a document following the results of the Olympics. There are sports that were praised, others were scolded, but there was no tennis anywhere. How can you explain it? Is this because we didn’t sign a target preparation program or performed badly?”