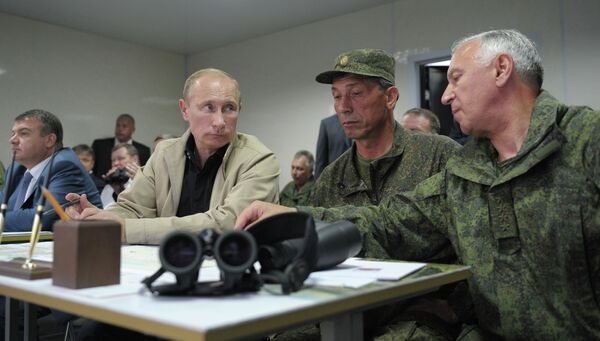 The Rayevsky range, located near the Novorossiisk naval base, hosts the key military training event in 2012 on September 17-23.

"These exercises have only one objective to pursue - the Armed Forces must demonstrate their readiness to defend our national interests, they must show that they are ready for a resolute response to any challenges and threats to the national security of Russia," Putin said addressing the troops involved in the drills.

The president also reaffirmed the plans to strengthen the Russian military, to equip it with advanced weaponry and make it a formidable fighting force.

Overall, up to 8,000 servicemen, over 200 military vehicles, some 100 artillery pieces and about 10 warships are taking part in the war games, led by the chief of Russia’s General Staff, Gen. Nikolai Makarov.

During the active phase of the exercises, the Russian president will watch the troops “practicing mobile defense of a delaying position.”

Georgia has already criticized the drills as an event threatening stability and security of the entire Caucasus region.