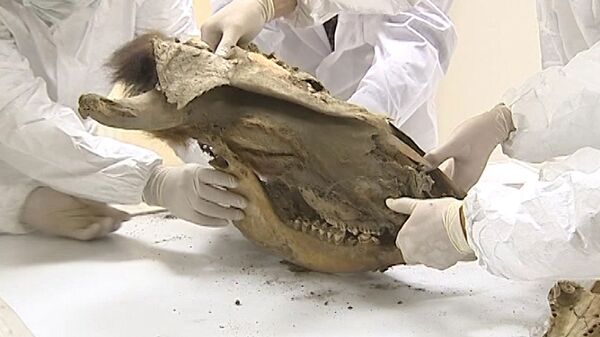 The results of a joint Russian-South Korean expedition in search of clonable mammoth cells in permafrost were summed up at the North-Eastern Federal University (NEFU), located in the Republic of Sakha (Yakutia), on Tuesday.

The results of a joint Russian-South Korean expedition in search of clonable mammoth cells in permafrost were summed up at the North-Eastern Federal University (NEFU), located in the Republic of Sakha (Yakutia), on Tuesday.

The expedition found mammoth wool with frozen fat and several bones, including a marrow bone, near the village of Kazachye. When analyzing the bone marrow through a high-resolution microscope, scientists discovered a visibly undamaged karyon, or a cell nucleus.

This led to the sensational announcement that researchers had found “living mammoth cells,” and next they will attempt to clone the extinct Ice Age animal.

“I was surprised to hear reports about ‘living’ mammoth cells. I phoned my colleagues in Yakutsk to caution them against wishful thinking,” Alexei Tikhonov, the deputy director of the St. Petersburg Zoological Institute of the Russian Academy of Sciences and the Russian curator of the expedition said in an interview with RIA Novosti.

A mammoth or a rhino?

In historical terms, mammoths went extinct quite recently, a “mere” 3,700 years ago. This was during the Bronze Age, when Egyptians had a formal writing system, the hieroglyphs, and the flourishing Minoan culture on Crete became famous for the inventor Daedalus and his son Icarus, who flew too close to the Sun, the Minotaur and his labyrinth, and many other “innovations.”

Since mammoths became extinct relatively recently while glaciers were moving south, scientists hoped that they would eventually find a body suitable for “reviving” them. Their hopes were realized when a sheep named Dolly was cloned by scientists in Edinburgh.

They no longer needed a body; theoretically, all they needed was a single living cell from any part of the body – muscle, fat, bone, skin or even tail hair, provided it could be brought back to life after thawing.

The first to come to Russia’s Far North in search of such cells in the late 1990s was Japanese Professor Akira Iritani, who at that time was director of the Institute of Advanced Technology at the private Kinki University in the Nara Prefecture.

“In 1997 and 1999, Japanese scientists joined our search for 'fresh' mammoth bodies on the banks of the Kolyma River. We did not find any living cells, only a shred of skin, which Iritani took with him to Japan. We encountered many problems with taking it out of the country; we waited an especially long time for a permit from the Ministry of Culture. Ultimately, it turned out that it was not mammoth skin at all, but the skin of an ancient wooly rhinoceros,” said Gennady Boyeskorov, a doctor of biological science from Yakutsk.

He said that those expeditions were financed by Japanese investors, who hoped to find tissue for cloning.

The next attempt was undertaken last summer by geneticists from South Korea's Sooam Biotech Research Foundation and Russia’s North-Eastern Federal University. Semyon Grigoryev, the head of the expedition and director of the NEFU Museum of Mammoths, said that the expedition was very well prepared and that they knew where to look.

In addition to geneticists and paleontologists, the expedition included a film crew from London’s CB-films, which filmed the cloning procedure at the request of National Geographic. Grigoryev said the film will be released next year.

“We were working near my native village, Kazachye, where locals have been digging holes in search of mammoth tusks for a long time. The result is a network of underground corridors running for hundreds of meters at a depth of five to six meters. They are very interesting for researchers,” Grigoryev said. “At least five unique discoveries were made there over the past three years: a dog dating back 12,000 years, a 9,000 year-old baby elk, a 40,000 year-old baby mammoth, as well as ‘younger’ horse and buffalo bodies.”

They quickly discovered mammoth fur with fat and a marrow bone there. The bone was sawn to expose bone marrow, which was studied under the microscope that Korean scientists brought along.

According to Grigoryev, they saw undamaged cell nuclei containing DNA. They stored the bone marrow samples in a Korean freezer. Scientist Hwang Woo-Suk, the expedition's leader representing South Korea, hopes to use them to clone a woolly baby mammoth.

The enfant terrible of genetics

Hwang Woo-Suk is quite well-known in the research community, though not always positively. In 2006 he was fired from Seoul National University for fabricating a series of stem cell experiments. In 2009 he was given a two-year suspended sentence for violating bioethics laws and for other crimes against scientific and human morals. In particular, he was charged with taking human eggs from one of his laboratory staff for cloning experiments.

The scientist admitted to faking research data and withdrew the article he had sent to the U.S. magazine Science, in which he claimed that he had cloned 11 lines of embryonic stem cells. However, he continued his research at a private foundation.

Even his enemies admit that Hwang Woo-Suk is one of the most successful cloning experts in the world. He cloned a dog in 2005, which neither British nor American colleagues have succeeded in doing, and in 2011 he announced the successful cloning of a coyote.

“Before signing an agreement on the joint expedition, my Yakutian colleagues visited Hwang’s laboratory in Korea. They were impressed,” Alexei Tikhonov said.

“In any case, he is a courageous man. It takes a lot to go down into a 50-meter tunnel where you could easily die. Local people dig these tunnels in permafrost with the help of water pumps,” Tikhonov added.

“There was only one visibly undamaged cell nucleus in the sample. There were no undamaged cells; at least none have been found. Besides, we still don’t know if this is a nucleus from a mammoth cell or from some bacteria,” Tikhonov said.

According to him, scientists from Novosibirsk have found undamaged cells before, but these cells decomposed during thawing. It is highly improbable that cells would remain alive until they gradually become frozen after the body dies. Cells usually freeze when already dead, or are torn apart by razor sharp ice crystals during the freezing stage, the scientist said.

“But bacteria can become encapsulated and survive in suspended animation for tens of thousands of years. Only dead cells with portions of DNA can survive when vertebrates such as mammoths die. There were many such cases. But the nucleus from a dead mammoth’s cell transplanted into an elephant’s egg will not produce a mammoth clone,” Boyeskorov said.

“There is an insurmountable barrier to that. Even if we could revive a mammoth’s cell and implant its nucleus into an elephant’s egg, this would not produce an embryo, because these animals are too distantly related for that. They are not only from a different species, but from a different genus. Koreans have proved that you cannot clone a fox by using a wolf’s egg,” Tikhonov said.

He added that the most scientists could achieve, provided the mammoth DNA is preserved intact, is to create a transgenic elephant, which is an elephant with mammoth genes added to its DNA.

“It will be neither a mammoth nor an elephant,” said Alexei Tikhonov, one of the most highly respected mammoth experts in the world and the scientific secretary of the Geneva-based International Mammoth Committee.

“On the other hand, science is continuously progressing. A few years ago, I would have said that cloning a mammoth is outright impossible. Today, I am not so sure. There may come a time when they are able to do it,” the scientist concluded.