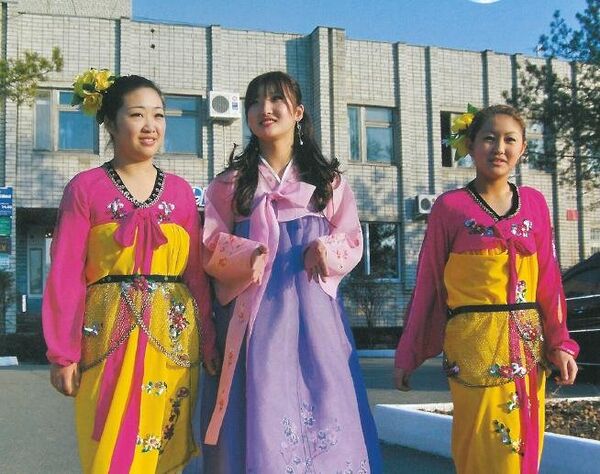 Russian legislator Valentin Pak has a monument in his honor in North Korea – and another one in South Korea. Unostentatious support for Korea’s peaceful unification is just one of the services that the Russian Koreans render to their two – or, rather, three – home countries.

Russian legislator Valentin Pak has a monument in his honor in North Korea – and another one in South Korea.

“Here are two consuls hand in hand, and I'm in the middle,” said Pak, the speaker of a district legislature in the far eastern Primorye Region, pointing to a photo of diplomats from both Koreas mingling at an event he organized.

Pak, who runs a Korean diaspora organization in Primorye, also stages trips for local kids to a summer camp in Songdowon, 120 kilometers east of Pyongyang (“the kids can't shut up about Songdowon,” he says), publishes a newspaper for ethnic minorities and organizes a host of other events for the diaspora – where he says the people of two Koreas interact more than they do at home.

Unostentatious support for Korea’s peaceful unification is just one of the services that the Russian Koreans render to their two – or, rather, three – home countries.

The Korean diaspora, which boasts a 150-year history full of trials worthy of the Biblical Job, returned to Primorye in the early 1990s, following decades of Stalin-imposed exile.

The 30,000 Koreans seamlessly blended into local economic life while maintaining their ethnic identity, an unlikely diaspora success story in a multinational country riven by ethnic tensions.

They say they are not going back to their historical fatherland, and the main concern of the diaspora’s elders is that their teenage kids date Russians or speak no Korean – though given the filial piety hard-wired into the Korean mentality, the parents do not worry too much.

Leaving Juche at the Door

If your house in Primorye needs a paint job, chances are it will be done by a team of North Koreans, about 5,000 of whom join the region’s legal labor force every year.

Contrary to some media reports, North Koreans were not actively employed in preparations for the APEC summit this month (the honor went mostly to the Uzbeks), but they are in demand in the private sector, earning a reputation for efficiency and cheap services – though occasionally teams comprised of rustic dwellers bungle the unfamiliar city jobs.

South Korean businesses are also trickling to Primorye after two decades of near-absence. The country’s consul in Vladivostok, Lee Yang Goo, delicately notes that the Russian economy could benefit from fewer administrative barriers and a level playing field for all.

But come the Seol-lal, the Korean New Year, or Chuseok, the harvest festival, both meet at a traditional party staged by the diaspora to celebrate, hang out and down a little rice wine.

The diaspora's cooperation with the two Koreas is formally limited to cultural ties: Primorye kids fly to South Korea for sightseeing tours, and local dance troupes take lessons from masters in Pyongyang.

But what matters more is the opportunity for informal contact that the diaspora offers to the divided country.

“All roads here pass through Primorye – and here we are,” Pak said.

Ideology plays a small role during contacts, said Vyacheslav Li, one of the founding fathers of the Korean community in Vladivostok. North Koreans “tried to preach their [Juche] ideas to us during events, but gave up fast,” he said with a dismissive wave of a hand.

The ties to the reclusive North Korean regime are made easy by the shared Communist past, Pak admitted.

Between the propaganda and the scarcity of consumer goods, “[North Korea] is like our own country, just 40 years ago,” the Soviet Union-born Pak said with a tinge of nostalgia.

He readily conceded that North Korea has “a buttload of problems,” but noted that “at least their people are smiling, unlike the sour faces here.”

The diaspora’s relations with its homeland are not exactly problem-free, either. “The North Koreans think of us as traitors, while the South Koreans see us as swindlers,” Li said perhaps ironically, with a smile that looked apologetic.

Next to no Russian Koreans – who speak no Korean en masse – emigrated back to their historical homeland, and Korean companies give them no preferential treatment after some years of utilizing their services in post-perestroika times, Pak said.

“We want and help the Russian Koreans to be good Russian citizens,” South Korean Consul Lee said. “Only with a little loyalty to us.”

The deadly famine of 1994 to 1998 in North Korea made international headlines, but the country has seen plenty of such disasters over the centuries.

One of them gave birth to the Korean diaspora in Russia in the 1860s, which has since endured a century and a half of hardship, most of it state-imposed.

The tsarist government allowed Korean refugees to settle in Primorye, though they often found themselves kicked out of the virgin soil they cleared, the land handed over to incoming Ukrainian settlers, said Tatiana Kim, who heads a Korean organization in Artyom, a commuter town outside Vladivostok.

The Koreans sided with the Bolsheviks during the revolution, fighting Japanese invaders to Russia who have conquered Korea around the same time, triggering another inflow of refugees, this time mostly the intelligentsia.

But the loyalty did not pay off: in 1937, at the height of Stalinist paranoia, the Koreans were deported from Primorye to Soviet Central Asia as potential “Japanese spies.”

The Koreans survived again, building up thriving kolkhozes, or collective farms, one of which was rich enough to foot the bills of Uzbekistan’s most famous football team, Pakhtakor, Kim said.

“I had an apartment in [the old Uzbek city] Samarkand, another apartment, and a two-story dacha,” said Kim, who was an associate professor at an architectural college. “I meant to spend my life there, you see.”

But she couldn’t. After 1991, the newly independent Central Asian republics took to pressuring the Russian population, most of which emigrated. Koreans were not Russians, but they spoke the language, which put them in the same boat.

Agriculture workers moved to Russian heartland, such as the Moscow and Ryazan regions, where there was land to cultivate, said diaspora activist Li. But others opted to go back to the roots.

“You’ve no idea how many people passed through my rented apartment in Vladivostok, sleeping on the floor with coats for blankets,” Kim said.

The hard work paid off for the third time in the diaspora’s history. Though no Primorye Koreans have any solid figures about the diaspora’s economic well-being, they all agree that most members run their own successful enterprises in many local industries, with agriculture coming in a distant second.

“You see a couple familiar mugs among the local bigshots – not many, but they are there,” said legislator Pak, who runs a publishing business and accepts visitors in a sprawling office filled with expensive-looking leather furniture.

Though ethnic tensions are considered a major problem in Russia – just this week, somebody locked up 14 Vietnamese migrants in the Moscow Region and burned them alive – Koreans say they are never victims of hate crimes.

“There was this meeting on migration, with various diasporas reporting issues, but we and the Ukrainians had nothing to say,” said Kim. “Well, one official quipped at this, ‘what do you expect, the two are basically the indigenous people here.’”

Of Kimchi and Dating Russians

It’s not really hard, being a Primorye Korean. You need to observe certain holidays – the Seol-lal and the Chuseok – occasionally cook Korean food (pickled vegetables kimchi are a prerequisite), and respect your elders.

“They may speak no Korean and know nothing [about Korea], but they know how to honor the dead relatives, how many bows to make and all,” Kim said about Primorye Koreans.

Some kids, however, are sent to South Korea just to learn these and other customs, she added.

Half of the younger generation – the first one to grow up in Primorye – is not culturally conscious, ignoring their heritage entirely or focusing on South Korean soap operas or K-pop, the über-sleek bubblegum music of their fatherland, diaspora elders admit.

Some ethnically conscious Korean parents actually frown at their children dating Russians and may prohibit it outright, said one young diaspora member who asked not to be identified. She said she never faced such a Romeo-and-Juliet situation herself.

But many embrace the culture willingly, such as Yelena Kim, 24, a member of a traditional dance troupe in the town of Artyom (no relation of Tatiana Kim).

She said she was indifferent to her Korean heritage until she saw her ensemble performing. Now she herself dances onstage in long-sleeved and long-skirted dresses, the hanbok, and plans to study the language – something most Russian Koreans never master.

“My mum dragged me there,” Kim added with a smile, speaking about the performance that triggered her cultural instincts.

But strangely enough, it is the same patriarchal mentality that Russian Koreans think is holding back the merger of the divided country.

“But it'll all get going when the old [North Korean] guard dies out, the ones who tell [new leader] Kim Jong-un, don't you break your father's traditions,” he said.