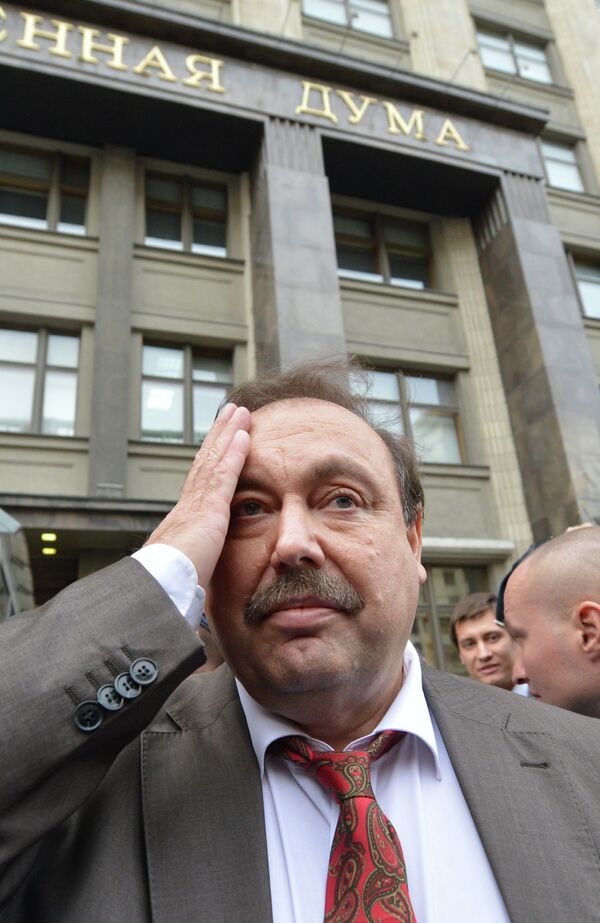 © RIA Novosti . Vladimir Fedorenko
/
Go to the photo bank
Subscribe
Opposition lawmaker Gennady Gudkov was ousted from Russia’s lower house of parliament on Friday over charges he said were “payback” for his involvement in anti-Kremlin protests.

Opposition lawmaker Gennady Gudkov was ousted from Russia’s lower house of parliament on Friday over charges he said were “payback” for his involvement in anti-Kremlin protests.

“I will leave, but will return to help build a new Russia that our children and grandchildren can be proud of,” an emotional Gudkov told fellow lawmakers. “And this will be soon – very soon.”

"They're expelling me from the Duma because they're afraid of the truth, afraid of criticism,” he added.

His expulsion after an at times stormy State Duma session came ahead of a mass rally set for central Moscow on Saturday against the twelve-year rule of President Vladimir Putin.

Gudkov, 56, and his son, Dmitry, 32, also a State Duma lawmaker with the A Just Russia party, are among a handful of members of parliament who have joined forces with an opposition movement that has seen an uneasy alliance among liberal, communist, and nationalist forces.

Gudkov, a former KGB colonel, was accused of engaging in direct commercial activity while serving as a lawmaker, which is forbidden under Russian law. Russian members of parliament are allowed to own businesses, but not participate in their management.

The vote was called after investigators asked for Gudkov’s expulsion so that they could charge him with fraudulent business dealings in a case that could also land him in jail. State Duma members receive immunity from prosecution.

But while analysts were split on whether his ouster was a case of was selective justice, they agreed that dozens of lawmakers were also involved in commercial activity.

“Gudkov was incriminated in involvement in business before the last Duma elections (in 2008),” independent analyst Vladimir Slatinov told RIA Novosti. “So the question arises, why wasn’t this done earlier? Why only after he got involved with the protests?”

“I don’t believe this will be the last case,” said Moscow-based analyst Nikolai Mironov. “The Gudkov case has made a great splash and now we will see multiple grounds for the launch of inspections and probes into shadowy business dealings by lawmakers.”

But Mironov also suggested many future investigations into alleged illegal commercial activity among members of parliament would be little more than a public relations exercise to convince the public that the Russian government was serious about its much-trumpeted “battle against corruption.”

Ruling party United Russia’s parliamentary faction and lawmakers from the nationalist Liberal Democratic Party voted for Gudkov’s ouster, which was approved by 291 members of parliament, almost 70 more than the minimum required.

Gudkov told journalists he would appeal to Russia's Supreme Court.

Dmitry Gudkov called his father's ouster "parliamentary cannibalism" in a Twitter post, adding "This is an indication of a parliamentary crisis."

The case is almost without precedent. Gudkov, who has been a member of parliament since 2001, became only the second lawmaker in post-Soviet Russia to be removed from parliament without a court ruling. The only previous legislator to be ejected after a simple Duma vote was Sergei Mavrodi, head of the notorious 1990s MMM financial pyramid scheme, which cost millions of Russians their life savings.

But Gudkov denied the accusations against him and said they were the Kremlin’s revenge for his involvement in the mass opposition protests that broke out after last December’s disputed parliamentary polls.

“This is pure payback for my opposition activities,” he told RIA Novosti in an exclusive interview last week.

Gudkov has alleged the withdrawal of his private security’s license to store weapons earlier this year was also part of a campaign of pressure linked to his outspoken Kremlin criticism.

And the anti-Putin opposition has linked Gudkov’s expulsion from parliament to what they say is part of a wider crackdown on dissent that has also seen opposition figurehead Alexei Navalny charged with large-scale embezzlement in a case that could land the popular anti-corruption blogger in jail for up to ten years.

But Putin denies “clamping down” on the leaders of unprecedented protests against his twelve-year-rule.

“If we understand this term as a simple requirement that everyone, including the opposition, complies with Russian law, then this requirement will be consistently enforced,” he said last week in his first television interview since his May 7 inauguration.

And leading United Russia official Andrei Isaev told parliament that Gudkov’s expulsion would prove that everyone in Russia was equal before the law.

“Are they going to jail him or forbid him to take part in political activities?” he asked. “No.”

But Russia’s Investigation Committee said shortly after Gudkov’s expulsion that charges could be brought against him if a probe into his activities revealed grounds for doing so.