Drone Market Set to Take off in U.S. 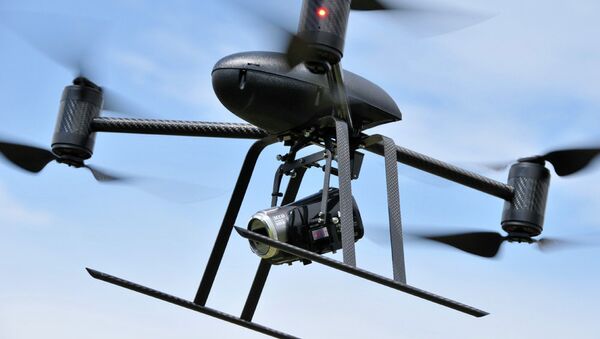 Up until now aerial drones have been used mostly by the U.S. military overseas to kill terror leaders and provide surveillance, but a burgeoning new industry is developing, eager to put non-military unmanned aerial vehicles in the skies over America and turn an enormous profit.

Up until now aerial drones have been used mostly by the U.S. military overseas to kill terror leaders and provide surveillance, but a burgeoning new industry is developing, eager to put non-military unmanned aerial vehicles in the skies over America and turn an enormous profit.

“This is going to be a trillion dollar industry,” said Jerry LeMieux, a retired Air Force Colonel and founder of Unmanned Vehicle University, which began offering accredited, online courses in unmanned flight systems in July. “There’s going to be tens of thousands, if not hundreds of thousands, of jobs in this industry.”

First the Federal Aviation Administration has to create and implement a plan for safely opening the national air space to private, unmanned aircraft.

Earlier this year President Barack Obama signed legislation ordering the plan to be in place by September 30, 2015. But there is so much at stake financially, and so much anticipation, that not everyone seems sure of the current restrictions or willing to wait for them to be eased.

“I get written permission from the owners that we can fly on their property and we’re working, and it doesn’t seem to be a problem,” said Aaron Spicker with Aerial Film FX in California. His fleet of six drones can be equipped with HD video cameras to shoot everything from surfing competitions to multi-million dollar mansions for realtors at a cost of $1,500-$5,000 per shoot.

“How versatile it is to be able to film on the sand to the surf and over the open ocean? There’s no vehicle that can transition so smoothly,” said Spicker.

“It’s as real as you can get to being there,” said one of Spicker’s clients, realtor Ed Kaminsky. “We had a property on two acres of land, meticulously landscaped with winding paths that are absolutely stunning. It’s hard to capture that in a few pictures, but the video really showcases it, and we have an offer on it right now.”

But an FAA official says this kind of commercial use of drones is illegal, and violators risk both sanctions and penalties.  He asked not to be named, because he doesn’t want to face the wrath of frustrated drone operators who are chomping at the bit for the regulations to catch up to technology.

“We know there’s guys out there flying illegally, because they have so much money invested that they’re willing to take the risk,” he said. “It’s amazing what’s out there. The potential is huge, but we want it done safely.”

“I laid off 35-plus people back in November, when the FAA told me if we continued to fly they were going to fine us between $10,000 and $100,000 per incident,” said Rusty Freeman of Mi6 Films, another California aerial photography and video company.

Freeman said if the restrictions were lifted today, he could employ 20-25 people and bring in as much as $50,000 per month. Instead, he’s shut his U.S. operations down for now, using drones to shoot commercials and movies in Europe and Canada, and referring potential clients in this country to companies he suspects might be willing to ignore the restrictions.

“The movie industry still wants and needs small (unmanned) helicopters, and they’re out flying every single day,” he said. We get production orders (for drones) every week and I’ll have one of our gals give some of them a call and say, ‘Here’s an available gig if you want it.’ “

But he’s frustrated and impatient with the pace of progress. “There’s no valid concern about what we’re doing. We’re flying on a closed movie set, maybe 50-60 feet off the ground. Drones are a thousand times safer than using real helicopters.”

Already the public sector has jumped at the opportunity to apply for Certificates Of Authorization which allow them to fly drones in limited situations now.

The FAA had issued 311 COAs to government agencies, universities and law enforcement groups by mid-July, more than double the number of permits it granted in all of 2009.

The Mesa County Sheriff’s Department in Colorado began its unmanned vehicle program four years ago. It has a Draganflyer X6, which weighs about three pounds and can fly for 10-15 minutes, and a Falcon UAV, which has one propeller, both color and infrared camera capabilities and can fly for about an hour.

Last winter the Falcon was part of a search for a missing boy with developmental disabilities, but both vehicles have been used primarily for sophisticated crime scene reconstruction.

“Sometimes it’s a logistical nightmare taking a jury to an old crime scene, so this allows us to present it as close to the time of the crime as possible,” said Ben Miller, head of the sheriff department’s Unmanned Aircraft Program. “We fly a circle around a crime scene and can create a 360-degree photo, going back in time in a way. That’s something that hasn’t been done with manned aviation. Flying 60 feet off the ground with a helicopter, you’d destroy the crime scene.”

Much larger Predator drones weighing about 10,000 pounds are also being used for border patrols and fighting forest fires.

Entrepreneurs are eager to cash in on the booming business, but there are concerns about privacy and security.

Todd Humphreys, an assistant professor of aerospace engineering and Director of the Radio Navigation Laboratory at the University of Texas-Austin, says the drones being made for commercial use now aren't secure, and could easily be taken over by terrorists or organized crime groups.

“The software that can be used to initiate an attack is getting better and cheaper, and the drones are becoming more plentiful," Humphreys said. "I think there are a lot of jobs to be had. I’d like to see a whole host of FedEx planes… but I don’t want that to happen until it can be done securely."

The unnamed FAA official also preaches patience, but acknowledges that once regulations are in place, the possibilities are limitless.

“Ten to fifteen years from now you could have cargo planes remotely piloted, who knows what else?” he said. “The potential is huge.”