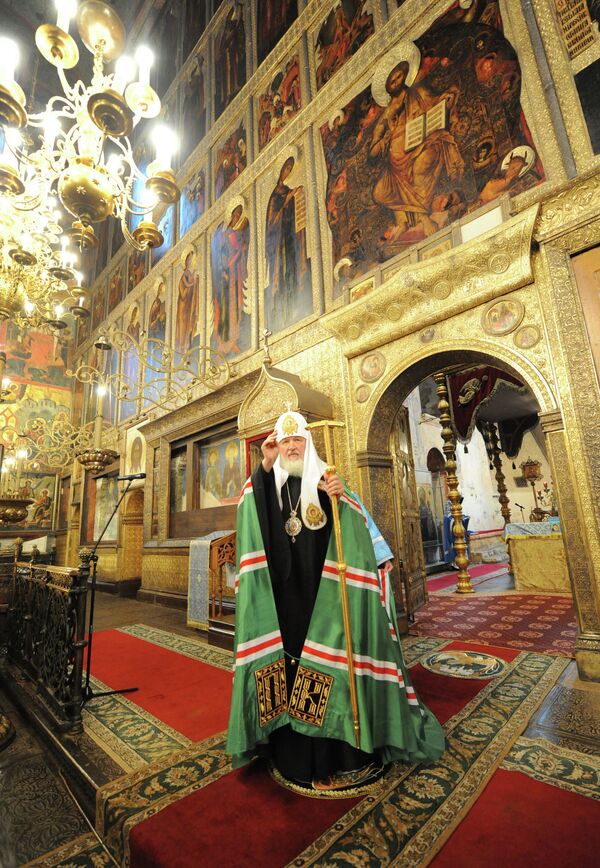 © RIA Novosti . Serge Pyatakov
/
Go to the mediabank
Subscribe
International
India
Africa
Near boiling-point tensions between Russia’s major Christian faith and the “creative class” it says is waging a war against it were racked up even further on Monday after the head of a rights group launched a bid to have powerful Orthodox Church leader Patriarch Kirill excommunicated.

Near boiling-point tensions between Russia’s major Christian faith and the “creative class” it says is waging a war against it were racked up even further on Monday after the head of a rights group launched a bid to have powerful Orthodox Church leader Patriarch Kirill excommunicated.

“There are at least six arguments for Patriarch Kirill’s defrocking and excommunication from the church,” wrote Mikhail Anashkov, the head of Russia’s Consumer Rights Protection Society, on his Live Journal account.

Anashkov said on Monday he had forwarded a request to have the patriarch excommunicated to the Council of Bishops, the only church body with the power to defrock and remove the patriarch from his post.

A statement by the rights organization said the 65-year-old patriarch was guilty of violating church law cited by the prosecution in the recent Pussy Riot trial. Three members of the group were jailed for two years each last month after a protest in Moscow’s landmark Christ the Savior Cathedral over Orthodox Church support for Vladimir Putin ahead of the March 4 elections that returned him to the Kremlin.

The organization, which unsuccessfully sued the Orthodox Church this year over the sale of religious items on the territory of the Christ the Savior Cathedral, said the patriarch was guilty of violations of church law including “covetousness and trading in the House of God.” It also said he had broken canon law on cohabitation with a woman who was not his mother, sister or aunt. Orthodox Church law has not been updated since the 8th century.

Patriarch Kirill has come under fire from opposition figures in recent months over allegations that he shares an elite Moscow apartment with a woman known only as Lidia Leonova. Orthodox Church officials have said she is his “cousin twice removed.”

He also came under unprecedented criticism in April after he insisted in an interview with a Russian journalist that he had never worn a $30,000 Breguet watch he had been given as a gift. Any photographs of him doing so had likely been doctored, he suggested.

But eagle-eyed bloggers quickly discovered on the Orthodox Church’s official website a photograph of Kirill wearing the watch in question. Less than 24 hours later, the watch had been airbrushed out. Unfortunately for the Orthodox Church, the inattentive editor had left intact the tell-tale refection of the luxury timepiece on a varnished table, triggering a storm of online mockery.

“The patriarch has the right to wear any watch he wants,” insisted leading Orthodox Church official Vsevolod Chaplin in an exclusive interview earlier this year with RIA Novosti.

Anashkov’s bid to force the patriarch’s excommunication came less than 24 hours after the patriarch told worshippers in the Christ the Savior Cathedral that the church’s opponents were “testing the people’s ability to protect their holy places.”

Without mentioning the Pussy Riot case by name, he later told a state-run television channel that “This was some kind of exploratory strike to test the depth of faith and commitment to Orthodoxy in Russia” by what he referred to as “the so-called creative class.”

"Creative class" is the term traditionally used to describe those members of Russia's nascent urban middle class who are seeking a greater say in the way the country is run.

Patriarch Kirill, an alleged former KGB agent, also denied allegations by the anti-Putin opposition that the constitutional separation of the church and state was under threat, saying that Russia was instead seeing “the Christianisation of society.”

"That is what frightens our opponents,” he added.

The aftermath of the Pussy Riot verdict, which drew sharp international criticism, saw four wooden crosses chopped down in Russia’s regions last month by a shadowy group who said it was “revenge” for the ruling. A senior Moscow priest, Dmitry Smirnov, said the act amounted to a “declaration of war” against the Church.

The Pussy Riot row has also sparked a rise in Orthodox militancy, with fringe groups announcing plans to patrol near churches to protect them from “desecration.” In high-profile incidents in Moscow last month, Orthodox activists in Moscow tore a Pussy Riot T-shirt off a member of the public and harassed staff at a downtown museum of erotica. In a further indication of religious strife, a suspected drug user was found murdered with an Orthodox religious icon placed on his face in St. Petersburg, investigators said.

The rising tensions have seen a sharp division of battle lines.

Influential United Russia lawmaker Vitaly Milonov told RIA last month that “today’s liberals are exactly the same as the Bolsheviks were a century ago. They are extremely aggressive toward those who don’t agree with them. They are ready to hang us all.”

In a letter published in Russia’s opposition-minded newspaper Novaya Gazeta last week, jailed Pussy Riot members insisted they were not enemies of religion and urged their supporters to restrict themselves to “peaceful” acts of protest.