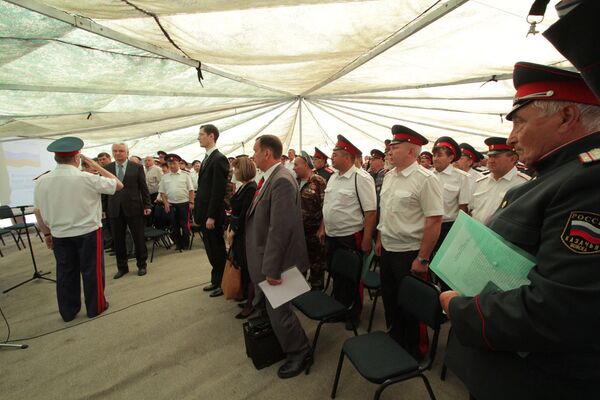 Hundreds of Cossacks began patrolling the streets of cities in Russia’s southern Krasnodar region this weekend in what local authorities called grassroots activism and critics fanning of interracial tensions.

Up to 1,000 Cossacks are involved in the patrolling, 150 of them in the regional capital Krasnodar, Yuga.ru local news website said.

The uniformed Cossacks carry no weapons except for their whips, but are entitled to intervene against crime in progress, conduct document checks and detain suspicious people, Yuga.ru said on Saturday. Every patrol is accompanied by a police officer.

The idea of Cossack patrols was hatched by the region’s controversial governor, Alexander Tkachyov, who said last month that they would provide a balance against “aliens”, including natives of the neighboring North Caucasus republics.

The region, historically populated by ethnic Russians, has seen in recent years a steady inflow of economic migrants from the mostly Islamic regions of the North Caucasus, which resulted in ethnic tensions.

The Public Chamber, as well as independent local linguistic experts, have accused Tkachyov of fueling ethnic hatred, a criminal offense in Russia.

But Tkachyov said that he was actually trying to curb the tensions and that the Cossack campaign was only aimed against unlawful migrants bent on disturbing public peace.

A 2010 census showed the only one of dozens of North Caucasus nations with a significant legal presence in Krasnodar region, which has a population of 5.2 million, were the Adygs, who numbered some 14,000.

The Cossacks served as a special police force in tsarist Russia and were often deployed against street protests, which gained them much notoriety and made them the target of extensive repressions by the victorious Bolsheviks.