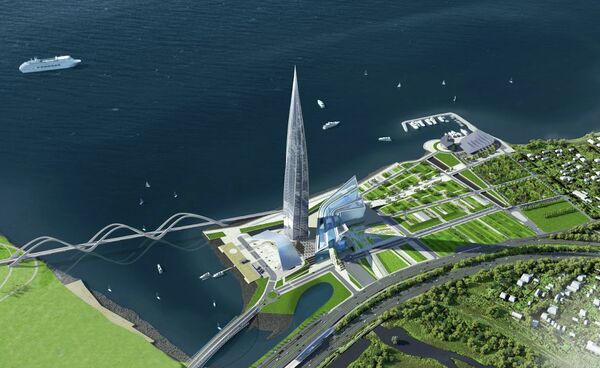 Construction of Gazprom’s 463-meter tall Lakhta Center complex in St. Petersburg will begin in October, the head of the Gazprom subsidiary in charge of the project said.

Construction of Gazprom’s 463-meter tall Lakhta Center complex in St. Petersburg will begin in October, the head of the Gazprom subsidiary in charge of the project said.

Gazprom received permission from the city to build the skyscraper complex on the shore of the Gulf of Finland earlier in August.

The site is nine kilometers from the city center. An earlier proposal to build in downtown St. Petersburg, at Okhta Cape, had to be scrapped in the face of stiff public opposition.

“Construction will proceed in phases,” said Alexander Bobkov, the head of ZAO Okhta Public and Business Center, which is overseeing construction of the complex.

“The tower itself will take the longest to build. I think we will break ground in October, since there are no legal or technical issues,” Bobkov said.

The 334,000-square meter complex will serve as the headquarters for Gazprom’s oil arm, Gazprom Neft, and other Gazprom subsidiaries.

Construction is scheduled for completion in the spring of 2018.

Bobkov did not specify the overall price tag for the project, but said each square meter is expected to cost $2,500-$3,500, much less than the estimated 60 billion rubles ($1.9 billion) to build at the Okhta site.

As for the Okhta site, near the Smolny Cathedral in central St. Petersburg, Gazprom had originally intended to sell the land, but suspended those plans after St. Petersburg Governor Georgy Poltavchenko said the site could be built up, according to press reports this spring.

The gas giant has tentative plans to build housing and commercial properties there, in order to recoup the 7.2 billion rubles invested in the project to date.

“The thing is that the decision was made, based on the work that was done, to designate the spot as a regional landmark. We hope there will be a final decision (on the acceptable uses of the land) before the end of the year,” Bobkov said.