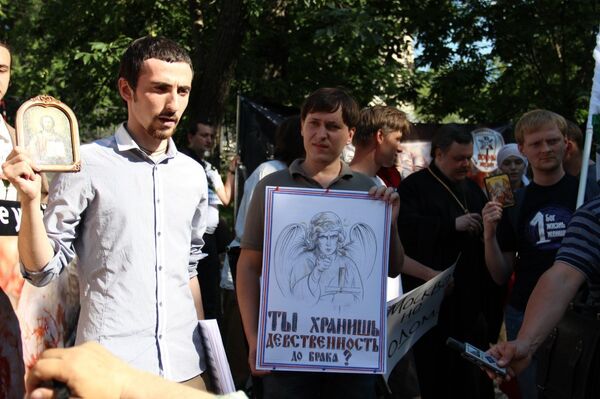 © Photo : Dimitry Enteo
Subscribe
Russia needs a civil society, but one where gays are put in rehabs and the opposition is locked in a political ghetto, said Christian activists who tear “blasphemous” T-shirts off people and barge into theaters and museums to preach.

Russia needs a civil society, but one where gays are put in rehabs and the opposition is locked in a political ghetto, said Christian activists who tear “blasphemous” T-shirts off people and barge into theaters and museums to preach.

“Our traditional values are being destroyed by people who consciously chose the path of evil,” Dimitry Enteo said in an interview.

Grassroots Christian activism used to be exotic in Russia, but Enteo and his “brothers in Christ” have catapulted it to national spotlight through a string of recent antics tethering on the brink of legality.

They preach to prostitutes, Protestants, antifascists and migrant workers; they picket opposition events and banned gay pride parades – frequently ending in detention despite their pro-Kremlin sympathies – and run a psychological help service for New Age addicts.

But Enteo and his friend Andrei Kaplin said they are as much a part of Russian society as any liberal protester to take to the streets in recent months, and deserve a public voice.

“We must work to create a civil society now, and do it without excluding the believers,” Enteo said on Thursday. He conceded the work is only just beginning.

For many, the awakening of Russia’s civil society began with rallies against Vladimir Putin’s return to the presidency, which attracted tens of thousands between December and June.

Most protesters were young, educated urbanites – Enteo’s very target group. He shares a special bond with them, admitting to have been a liberal who dabbled in esotericism before he “understood the Universe has a creator.”

Homophobia Will Save Us

What they want is for Russia to return to traditional values, the duo said.

Only two of those remain – homophobia and the need for a strong state – and removing them would undo Russia, Kaplin said.

Gay relationships should not be criminalized, but gays have to be prohibited from publicly promoting their lifestyle and instead given the opportunity to check into rehabs that treat their “deviation,” Kaplin said.

As for the opposition, the radicals among it are threatening a bloody revolution and need to be countered with both legislative action and civil activism, he said.

“There is no such thing as ‘secular morals,’” Enteo agreed, speaking about his ideological opponents.

“It’s just a label that covers up infernal powers. Satan is always posing as an angel of light,” he said, as if passionately preaching to his past self.
But Kaplin conceded the opposition has its uses, praising it for environmental activism. The protesters are entitled to five percent of seats in Parliament, but should not leave that ghetto, said Kaplin.

Both said they voted for Putin, whom their praised for his religiousness, and dismissed criticism toward church leadership, which was accused by its liberal opponents of living a life of luxury while allying with the authorities. Church head Patriarch Kirill endorsed Putin’s presidential bid, allegedly prompting Pussy Riot’s “punk prayer.”

During sermons at the theater and the museum, Enteo and Kaplin were accompanied by a camera crew from NTV, a pro-government television channel known for its vicious attacks on the Kremlin’s enemies.

The channel was even nicknamed “Surkov’s propaganda” in reference to current Deputy Prime Minister Vladislav Surkov, the Kremlin’s once all-powerful political mastermind – who, incidentally, was tasked earlier in August with overseeing the government’s relations with the church.

Both Enteo and Kaplin denied any ties to the government or church leadership, which is yet to comment on their actions.

“I don’t represent the church, I’m just a civil activist, though a deeply religious one,” Enteo said.

Their informal group has actually been active for years, preaching to the liberal opposition and non-believers of all stripes in “a language that people would understand,” Enteo said.

Driving the point home, during the interview Kaplin unfurled a makeshift poster of an angel modeled on the famous depiction of Uncle Sam, the frowning visage and pointing finger accompanied by the question: “Do you preserve virginity until marriage?” The two flaunted the poster at several pro-life pickets in recent months, drawing the attention of Russian bloggers.

One of their “brothers in Christ” has a habit of picking up prostitutes, paying them and then talking to them about chastity instead of “reveling in depravity,” Kaplin said.

But the activists have only gained exposure now, piggybacking the Pussy Riot trial, an international cause célèbre.

The activists took much flack for their stunts, both from the liberal non-believers and many Christians, including prominent media figure Archdeacon Andrei Kurayev, who said Enteo is “not all there.”

But Enteo said they were also flooded with calls and letters of support.

The group has a core of between 50 and 100 “trained missionaries,” but is capable of bringing out thousands in the streets, the activists claimed.

Both Enteo, 23, and Kaplin, 30, refused to speak about their occupations or private lives.

But they said they are disciples of the late Orthodox Christian priest Daniil Sysoyev, known for his missionary work among Moscow’s Muslims and his criticism of Islam. He was shot dead in a church in 2009, the murder still unsolved but blamed on his missionary activism.

“OK, and now we might get killed. That’d be cool,” Kaplin said during the interview, when the conversation was interrupted by Enteo reading about a twin murder in Kazan, featuring “Free Pussy Riot” scribbled on the wall in blood, on his tablet PC.

“That’d be cool,” agreed Enteo, who said he has been beaten by Krishna followers before. “I wouldn’t be surprised if they kill us.”

But martyrdom may remain elusive for now: the killing turned out to have been perpetrated not by a liberal fanatic, but by the lover of one of the victims who wanted to throw the investigators off.