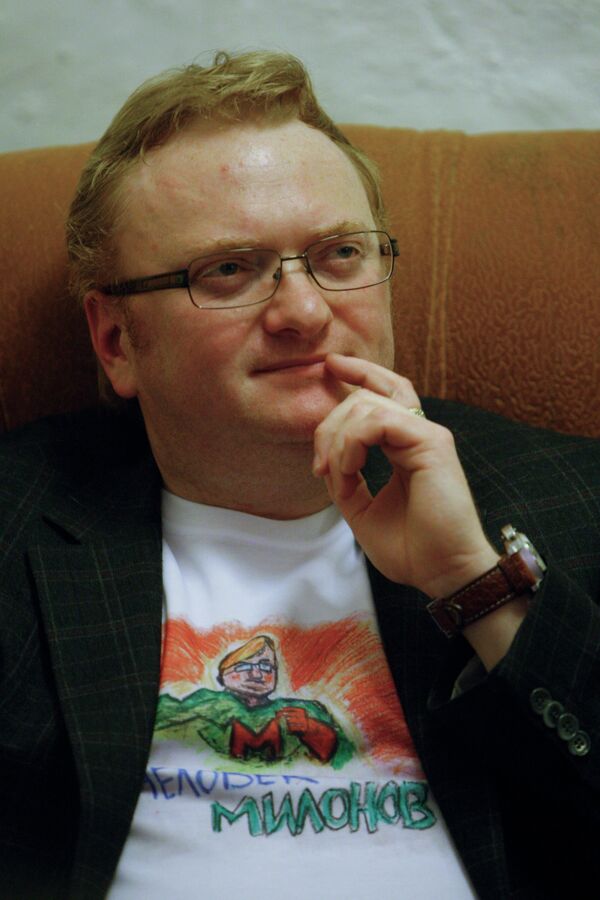 “As a person who dares to call himself a Christian politician, I cannot be a hypocrite,” says United Russia deputy Vitaly Milonov, author of a recent controversial law banning “gay propaganda” in his hometown of St. Petersburg. “I cannot be Christian at church, without being one at work, as well.”

“As a person who dares to call himself a Christian politician, I cannot be a hypocrite,” says United Russia deputy Vitaly Milonov, author of a recent controversial law banning “gay propaganda” in his hometown of St. Petersburg. “I cannot be Christian at church, without being one at work, as well.”

Appropriately, there is no portrait of President Vladimir Putin in Milonov’s spacious office in the city’s Legislative Assembly, where he is head of the lawmaking committee. Instead, Milonov, 38, sits under a framed photograph of the leader of the country’s powerful Orthodox Church, Patriarch Kirill.

And Milonov makes no secret of his approval for the current warm ties between the country’s secular leaders and the patriarch, who riled liberal society by calling Putin’s first two presidential terms a “miracle of God” ahead of March 4 polls that returned the former KGB officer to the Kremlin for a third term.

“The church is the most important government institution, one that shapes the state” says Milonov, who is also an Orthodox activist. “The church must not be in opposition to the state. It must nourish the authorities with its wisdom.”

But opponents of Putin’s 12-year rule have hit out at Patriarch Kirill in recent months over his support for the Kremlin, which they say threatens the constitutional separation of church and state.

Tensions rose to near boiling point over the high-profile trial of three members of the all-female, anti-Putin punk group Pussy Riot, who were jailed for two years each on August 17 on charges related to a protest in Moscow’s biggest cathedral over the patriarch’s “miracle of God” comments.

The aftermath of the verdict, which drew sharp international criticism, saw four wooden crosses chopped down in Russia’s regions last week by a shadowy group who said the act was “revenge” for the ruling. A senior Moscow priest, Dmitry Smirnov, said the act amounted to a “declaration of war” against the Church.

And on Thursday, police in Kazan, the capital of Russia’s republic of Tatarstan, said two women had been found murdered in their apartment, where the words “Free Pussy Riot!” had been written on the wall in what was thought to be blood. Pussy Riot supporters called the act an attempt to discredit the group.

The Pussy Riot row has also sparked a rise in Orthodox militancy, with fringe groups announcing plans to patrol near churches to protect them from “desecration.” In high-profile incidents in Moscow this week, Orthodox activists in Moscow tore a Pussy Riot T-shirt off a member of the public and harassed staff at a downtown museum of erotica. In a further indication of religious strife, also on Thursday, a suspected drug user was found murdered with an Orthodox religious icon placed on his face in St. Petersburg, investigators said.

“It’s obvious that relations between the church and a small but very active section of society have deteriorated sharply,” Milonov says, as the working day comes to an end in the grand 19th century building that is home to the city’s lawmakers.

“The cutting down of the crosses did not provoke the expected harsh reaction among government figures,” a clearly dismayed Milonov continues. “And so leading Church officials have been attempting to say that this is sacrilege and unacceptable – but they should not be the ones doing this.”

“The government often forgets to defend the church from attacks and insults,” Milonov says. “That’s why I am calling for a government ombudsman to protect and defend the rights of all religious organizations – it is not the business of the Church to justify itself.”

“The church is defenseless - like a flower that can be torn or trampled,” he says. “It will not die because of this, but it will not defend itself.”

But Milonov shakes his head slowly when reminded that the Pussy Riot members were punished with jail time for their protest, describing the trial as “awkward” for both the Orthodox Church and the authorities.

“There was no statement by leading political figures explaining our position – that, yes, we defend human rights and freedom, but these values are not exclusively as liberal society sees them,” he says.

“Anyone can write false and slanderous comments about the Church in social networks, but if I were to say the same thing about sexual minorities I would be instantly attacked by human rights defenders and so on,” he complains.

Milonov also rejects concerns that the Orthodox Church is in danger of losing its independence through its cooperation with the Kremlin, noting that it does not receive funding from the authorities.

“The Orthodox Church is not a political party and it will never make an official political statement,” he says, backtracking slightly when reminded of the patriarch’s pre-election support for Putin.

“Of course, Patriarch Kirill’s ‘miracle of God’ comment was a political statement of sorts,” he admits, after a brief pause. “But that was because he saw that the country would suffer if Putin did not remain in charge.”

“All authority is from God,” he goes on. “Any act of God is a miracle for Orthodox believers.”

While Milonov is quick to recognize the success the country’s opposition forces have had in “shaking things up,” he has nothing but contempt for what he calls the “Bolotnaya Square crowd,” a reference to the traditional central Moscow rallying point for anti-Putin protesters.

“Today’s liberals are exactly the same as the Bolsheviks were a century ago,” he says. “They are extremely aggressive toward those who don’t agree with them. They are ready to hang us all.”

Some 200,000 clergymen were executed during the Soviet period, according to a 1995 presidential committee report on Stalin-era repression. The Moscow Patriarchate says that the Soviet authorities murdered 80,000 people for their faith in 1937 – the peak of Stalin-era terror.

And Milonov takes a sharp intake of breath when asked to comment on reports that opposition figurehead Alexei Navalny is a committed Orthodox believer, albeit one disgruntled by the patriarch’s backing of his arch-nemesis. “If he is a believer, then I’d like to know where he goes to church,” he snaps. “It’s all very suspicious.”

“The goal of our opponents is the destruction of the Church’s undoubted moral authority,” Milonov goes on.

But analysts and opposition figures have questioned the basis of that “authority” since the onset of unprecedented anti-government protests last December, with the issue coming to the fore again in the wake of an opinion survey this month that indicated some 30 percent of self-confessed Orthodox Christians did not actually believe in God. It also found that some 90 percent of believers do not attend church services.

Milonov casts doubt on the accuracy of the Moscow-based independent Levada Center’s poll, but admits that in many respects “to be an Orthodox believer is the same as to be Russian.”

“But even for these people, the Orthodox Church has a certain moral authority,” he insists.

A former assistant to Kremlin critic and opposition lawmaker Galina Starovoitova, who was assassinated in St. Petersburg in 1998, Milonov joined the ruling United Russia party a decade ago after becoming disillusioned with liberal politics.

Never one to shy away from controversy, Milonov has proposed, this month alone, granting full citizenship to embryos and forcing women who have not given birth by the age of 23 to join the army.

But it is his much-discussed law on so-called gay propaganda in St. Petersburg, frequently referred to as Russia’s “most European city,” that brought him both notoriety and his current high-profile. And he offers no apologies for a bill that has seen him dubbed the “biggest enemy of Russian gays” in liberal circles.

“I don’t want children to get the wrong idea that traditional and non-traditional forms of partnerships are equal – they are not equal,” he says firmly. “Only a man and a woman can be a family – anything else is not a family.”

Russia remains an extremely conservative society and Milonov’s law found massive grassroots support. “It was one of the most popular in recent years,” he says, not without a touch of pride.

A July 2012 poll by the Levada Center found that 75 percent of Russians consider homosexuality to be either the product of "an illness or loose morals."

But critics of Milonov’s law, which has been adopted by four other regions across Russia, say it is too vague in its wording over what constitutes “promotion” of a homosexual lifestyle and is open to abuse.

“Look, the law says nothing about informing children about homosexuality if this is done as part of a school program,” he insists, brushing away criticism. “But a video clip by say, Madonna, in which she is kissing another woman that can be seen by children is gay propaganda. Children like to copy their role models.”

Milonov’s supporters launched a bid this month to sue U.S. pop diva Madonna for $10.5 million over her support for gay rights during a concert in St. Petersburg on August 9.

“If a child’s role model tells them that only homosexuals experience true feelings - this is dangerous. Children are very vulnerable to manipulation,” he adds.

And he likewise rubbishes suggestions that human sexuality is more complex than he presumes and unlikely to be affected by music videos on MTV, citing what he says are higher rates of homosexuality in countries with more liberal attitudes.

“Gay propaganda can influence children,” he insists. “Just look at Germany, where statistics indicate that 12 percent of the population is gay. Statistics also show that 40 percent of men in Berlin have tried homosexual sex. This can not be explained by biology.”

But Milonov says he does not want to see a return to the Soviet practice of jailing suspected homosexuals. “No, it should not be a crime,” he states.

Milonov may not be a fan of Madonna’s music, but he reveals an unexpected passion for the father of Russian punk, the late Yegor Letov, and his anti-establishment, obscenity-ridden music.

“I started listening to Letov when I was about 15,” he nods enthusiastically. “And, yes, I guess it influenced me. I used to swear a lot in my youth. But it was thanks to the Orthodox Church that I stopped."

"But, look," he goes on. "Just because I call myself a Christian, doesn't mean I think I am better than other people. It just means I have more responsibility."