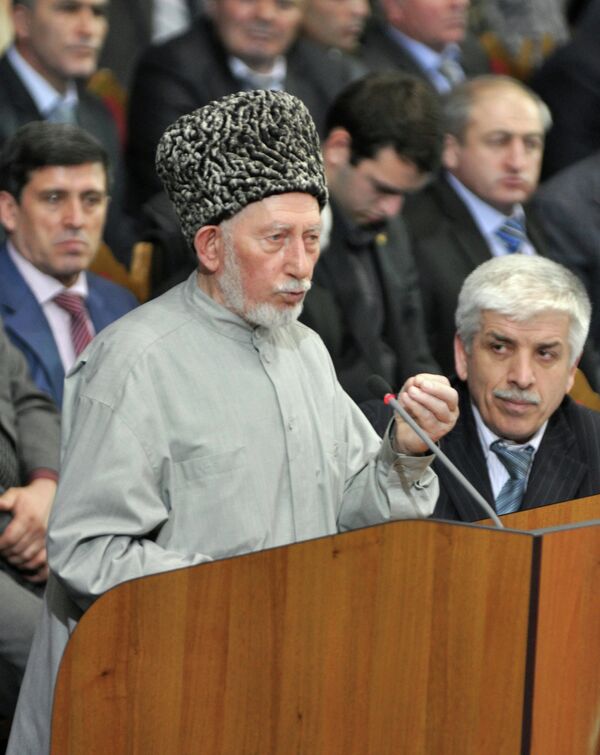 © NewsTeam
/
Go to the mediabank
Subscribe
International
India
Africa
The August 28 suicide bombing that killed a respected Muslim leader in Dagestan was the latest in a string of religious killings resulting from the conflict between moderate and radical Islam in Russia, analysts said on Thursday.

The August 28 suicide bombing that killed a respected Muslim leader in Dagestan was the latest in a string of religious killings resulting from the conflict between moderate and radical Islam in Russia, analysts said on Thursday.

Sheikh Said Afandi, an influential Sufi cleric, was killed along with six others in a blast police say was perpetrated by an ethnic Russian woman who converted to Islam and had ties to the Islamic insurgency in the volatile North Caucasus region.

Afandi, 75, was known to have publicly denounced Islamic fundamentalism, and his murder follows the July 19 coordinated attack on two high-ranking muftis in the Volga Republic of Tatarstan, one of whom, Valiullah Yakupov, was killed. Both Yakupov and Ildus Faizov, who narrowly escaped the attack with injuries, were perceived as state-approved religious leaders who attacked radical Islam.

As a cleric in the Sufi Brotherhood, Afandi was a key leader in the sect of Islam traditionally popular in the North Caucasus but despised by Islamic fundamentalists, who practice a puritanical form of Islam known as Salafism. While Sufis incorporate the worship of saints and highly theatrical ceremonial prayers into their practice, Salafis condemn what they regard as idolatry and any non-traditional forms of worship. They also call for the establishment of Islamic rule and Sharia law.

Afandi, like Yakupov and Faizov, played an active role in discouraging local populations from adopting radical Islam, and enjoyed support from the local authorities.

According to Caucasus security expert Mark Galeotti, Afandi was targeted “because he was a rival source of religious authority” to the Salafis and “challenged the legitimacy of their Manichean worldview,” he wrote on August 29 in his blog, In Moscow’s Shadows.

“It is interesting and illustrative that, as well as law-enforcement officials, the North Caucasian terrorists are now targeting religious leaders who are hostile to their jihad or, equally sinful to them, even just not actively supportive,” he said.

Galeotti added that the attack demonstrates a growing “Muslim civil war” is sprouting in the region.

Afandi’s murder follows similar religiously-motivated killings in Dagestan, such as a March explosion that killed Gatinomagomed Abdulgapurov, the imam of a Buinaksk mosque, as well as the October 2011 murder of Siradzhudin Israfilov, a sheikh in the republic’s Tabasaransk region.

Afandi was reportedly in the process of negotiating a peace agreement between the Sufis and Salafis, and had survived previous attempts on his life, according to religious expert Roman Silantyev.

Silantyev noted, however, that not only is compromise between Sufis and Salafis in Dagestan impossible, but the peace talks in which Afandi took part may have actually led to his death.

"I believe that those people who call for negotiations with terrorists, Wahhabis and Salafis should be prosecuted in court," he said.

Dagestan in particular is a hotspot for religious violence. After Ramzan Kadyrov came to power in neighboring Chechnya, the insurgency fanned out through the volatile North Caucasus region, and in recent years, Dagestan has become the bloodiest of all the republics.

The consistent violence has even sparked regional officials to urge local residents to take matters into their own hands. On Tuesday, shortly after Afandi’s death, Dagestan President Magomedsalam Magomedov raised the idea of organizing “search and destroy” operations run by so-called "self-defense units."

“I think that today we will make the decision in each city, in each region, to organize self-defense units – squads of young people prepared, under the direction of and in cooperation with internal affairs organs, to carry out work that ensures security and punishes these criminals and terrorists,” he said.