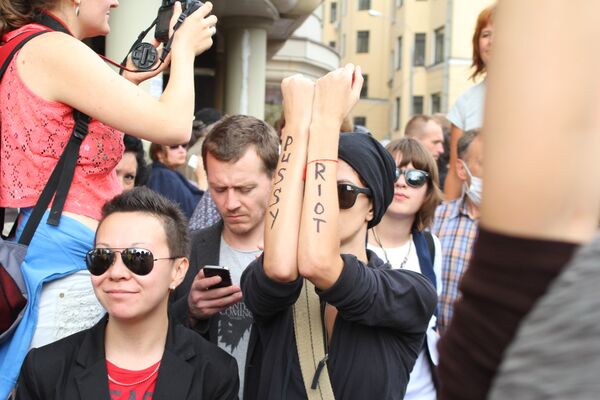 The trio, who disrupted a service in Cologne Cathedral on Sunday, may be jailed for longer than the band they support if a court charges them and finds them guilty.

According to the Frankfurter Rundschau publication, two young men and a young woman wearing balaclavas - similar to those Pussy Riot wore during their protest in Moscow’s central Christ the Savior Cathedral in February - tried to disrupt a church service.

The trio, who carried a banner reading “Free Pussy Riot,” distributed flyers and shouted. Security guards led them out of the cathedral.

"The peace of Cologne Cathedral was disturbed - we can't and won't accept this," Robert Kleine, the cathedral's dean, was quoted by thelocal.de as saying in Frankfurter Rundschau.

"The right to demonstration cannot be set above the right to religious freedom and the religious feelings of the congregation,” he said.

The three unnamed activists could now be prosecuted for breach of the peace and disrupting the free practice of religion, which is punishable by a maximum prison sentence of up to three years, or a fine.

A Berlin man was sentenced to nine months in prison in 2006 when he disrupted a service on German Unity Day.

An edited clip of Pussy Riot’s protest posted online showed the group alternately high-kicking and crossing themselves near the entrance to the altar of the Christ the Savior Cathedral, accompanying the “Holy S**t” song urging the Virgin Mary to “drive out” President Vladimir Putin. The song contained words insulting to Patriarch Kirill of Moscow and All Russia and to believers.