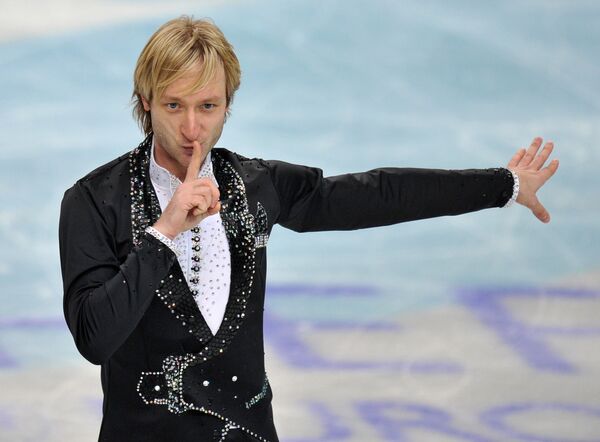 Seven-time European figure skating champion Evgeni Plushenko will be back to defend his title in Zagreb next year but will skip the Grand Prix season, he told R-Sport in a recent interview, and also discussed his new-found love of golf.

Seven-time European figure skating champion Evgeni Plushenko will be back to defend his title in Zagreb next year but will skip the Grand Prix season, he told R-Sport in a recent interview, and also discussed his new-found love of golf.

- Evgeni, how are your preparations for the new season going?

“The programs are already ready. During their preparation, I worked with Japanese specialist Kenji Miyamoto and with the Italian, Pasquale Camerlengo. Also our choreographer David Arvysh was with me the whole time, and the fitness coach Vitaly Balykin and, of course, my coach Alexei Nikolaevich Mishin. We work with a big group and are aiming for a good result this year. But the main target, like I’ve said several times before, that’s obviously the Olympics in Sochi [in 2014].”

- Where will you be competing this season?

“I think that the Russian and European championships are definite. There’s a preliminary agreement from the Japanese side with our federation that I’ll take part in the Japan Open team competition on October 6. I don’t plan to take part in the Grand Prix tournaments.”

- How did you get into golf?

“I tried playing golf 15 years ago but, to be really blunt, I didn’t like it. It’s obvious I was still too young and my head wasn’t ready to embrace golf. It wasn’t my sort of thing then. Golf is, in any case, a measured game, you don’t need to hurry anywhere and I needed movement all the time. Paintball, football, hockey, tennis, that’s what I was addicted to then. But then about half a year ago I was recovering from an operation and the doctors banned me from any fast movement. I wasn’t allowed to run or jump or crouch, nothing at all. And then I went past the course at Kurkino when I was heading to the training base at Novogorsk and I had the idea of playing some golf. I called the doctors and they said, yes, you can play golf. And I started.”

- Did you get the hang of it quickly?

“Yes, it worked out with the swings from the very beginning. To start with I played on my own, but then I got a coach. He suggested how I should hit the ball the right way. Of course, I have a real anti-technique, but the ball flew where it was supposed to go. And because I had to constantly walk and move for my recovery, I started playing lots of golf. Around the course, as you know, you walk a long way during a game. And I loved all of it!”

- How does it combine with your skating?

“Well, I have morning training on the ice. After that I got an train on the course for golf. After golf, it’s back on the skates for the evening training.”

- What plans do you have for golf?

“So far, obviously, I’m playing for myself. But then, after I finish my skating career, I’d really like to start playing golf seriously.”

- Do you watch much golf?

“I try to watch the main tournaments on TV. And I support Tiger Woods.”