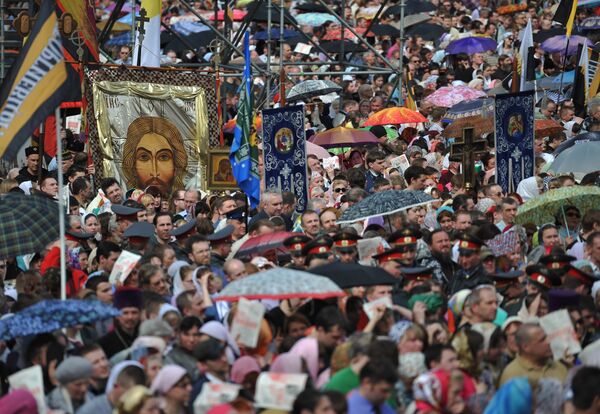 Autocratic Russia and the Union of Orthodox Citizens are planning to register an “Orthodox” political party, Izvestia daily reported on Thursday.

Autocratic Russia and the Union of Orthodox Citizens are planning to register an “Orthodox” political party, Izvestia daily reported on Thursday.

The organization’s founders said they see Russia as a monarchy with a special role for the Russian Orthodox Church and the patriarch of Moscow and all Russia as the country’s spiritual leader.

“We are registering a party that will struggle for the revitalization of Russia and our country’s traditions that were lost after the criminal Bolshevik coup,” Autocratic Russia leader Dmitry Merkulov said.

Russia needs to reunify with its canonical territories, first and foremost with Belarus and Ukraine, and elect an Orthodox monarch to lead the country to its former greatness, he said.

The new party will work to reinstate religious instruction in schools and emphasize traditional spiritual, moral and cultural values.

Valentin Lebedev, head of the Union of Orthodox Citizens, said the Russian Orthodox Church is currently under fierce attack because it is “the last pillar of Russian statehood, traditions and culture.”

As of late the Russian Orthodox Church has come in for unprecedented criticism both at home and abroad over the punk group Pussy Riot case.

Three punk group members, Nadezhda Tolokonnikova, 22, Maria Alyokhina, 24, and Yekaterina Samutsevich, 30, were sentenced on August 17 to two years in prison over a “punk prayer” in Moscow’s largest cathedral in a trial that attracted both mass media attention and sharp international criticism.

An edited clip of Pussy Riot’s protest posted online showed the group alternately high-kicking and crossing themselves at the altar of the Christ the Savior Cathedral, the accompanying “Holy S**t” song urging the Virgin Mary to “drive out” President Vladimir Putin and railing against the powerful Orthodox Church’s pre-election support for the former KGB officer.

Its critics claim the church has effectively merged with the state and it has faced a wave of criticism from what it has called supporters of “radical liberal values.”

On April 22 the ROC conducted a “defense of the faith” nationwide prayer to protect it from attacks by “anti-Russian forces.” The Church’s Supreme Council said it had been targeted by “those pushing through radical liberal values” over its opposition to same-sex marriages and consumerism.

Orthodox Church head Patriarch Kirill was condemned by opposition figures for his public backing of Vladimir Putin in the run-up to the ex-KGB officer’s landslide victory at March 4 presidential polls. The patriarch called the 12 years of Putin's rule a "miracle of God" in a televised meeting.

Top Church officials have also been criticized by bloggers and by opposition media for their “lavish” lifestyles. The anti-Putin Novaya Gazeta newspaper also alleged in February a pre-patriarch-era Kirill profited from Church tobacco and alcohol sales in the early 1990s.

Patriarch Kirill was also at the center of a scandal earlier this year regarding a $30,000 Breguet watch, which was airbrushed – although its reflection remained intact – out of an official Church photo following public indignation over his possession of the luxury timepiece. The patriarch had admitted owning the watch in an interview prior to the row, but said he never wore it.